Apparently, Moriarty need not be around for her dangerous organization to stir up change on Elementary.

During Sunday’s Season 4 finale, Morland took over the group’s leadership in order to secure Sherlock and Joan’s safety after their lives were threatened. Papa Holmes informed his son that he would be taking the organization’s dealings from New York City to London, where he planned to destroy Moriarty’s legacy from the inside. (With Morland bidding adieu to NYC, John Noble will no longer be a series regular in Season 5.)

TVLINE | Watching the finale, I couldn’t help but wonder what Jamie Moriarty would think of everything going on in the organization in her absence.
It’s funny, I asked myself the same question as we were getting into the last few episodes of the season. On the one hand, I think she would not take kindly to anyone [trying] to take it apart. At the same time, she’s a pretty confident mastermind, and she could start it all over again if she had to. 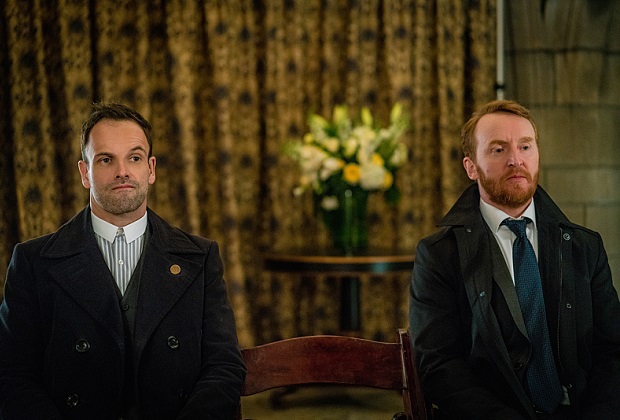 TVLINE | The Vikner/organization storyline was a clever way of making Moriarty’s presence felt despite what I presume was Natalie Dormer’s unavailability.
Yes. That was something we talked about internally, because we don’t want to invoke the name Moriarty and frustrate people when we don’t actually see her. But ultimately, we didn’t want to be handcuffed. We had a story to tell that would work without her and decided to tell it. All of that said, as always, we would love to have Natalie back when the time is right. We don’t want that storyline or that character to fall away.

TVLINE | Morland promises Sherlock that the group won’t operate in New York anymore, but they are still an active group. So how much influence will they have next season?
That is to be determined. Obviously, what Morland is trying to do is take their affairs outside of Sherlock and Joan’s orbit, and in the short term, that will be effective. In the long term, it’s a group with many tendrils, and depending on how quickly Morland’s able to work, the group may cross paths with Sherlock and Joan again.

TVLINE | Are Morland’s intentions entirely honorable and good? This is an organization that he could use to his own benefit as well.
Morland has been so successful for such a long time that more money and more power don’t necessarily appeal to him at this point. He is sincere when he says his primary goal is to protect Sherlock and Joan. But what is unspoken is that he’s giving up in a sense. He expresses to Sherlock in their last scene together that he doesn’t think people like them are meant to have family ties or friendships or partnerships, that it’s inevitable these things will go poorly because they are who they are. That is motivating him as much as anything. He’s disappearing back into the shadows, he’s cutting his meaningful ties and will probably live out his days just trying to take apart this group. 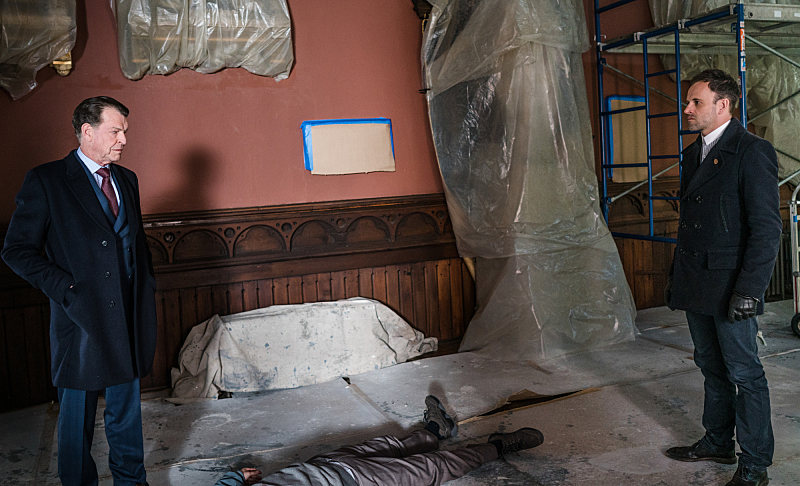 TVLINE | Sherlock and Morland have come a long way over the season. Is Morland wrong about Sherlock not loving him?
Golly… [Pauses] I’m trying to think of the right verb. It’s a really good question. I don’t think Morland looks at what he has with Sherlock at the end of the season and calls it love. He knows there are familial ties. There is a begrudging mutual respect. But they are not a traditional father and son. There are many other ties between them. I’d be hard-pressed to call one of them love.

TVLINE | Morland warns Sherlock, “Being loved by you is a dangerous thing,” and then Sherlock immediately tries to get Joan to move out. Will he continue to push her away?
It’s pretty obvious looking at Sherlock during that scene on the roof that he disagrees with his father, and he doesn’t approve of what Morland is doing. And yet, some of what Morland said is rattling around Sherlock’s skull, because why else would he posit to Joan that they live separately again? He said it because he had to say it. He wasn’t committed to it. Morland’s words won’t haunt him. He had to put it out there because he cares for his partner that much. I don’t think he was surprised to be turned down. It was just something he felt he had to say, and Joan dismissed and defused it. You’ll see a very strong partnership as Season 5 starts.

TVLINE | I love that Joan is already trying to play matchmaker with Marcus and her sister, Lin. Is that something that will actually be explored next season?
I don’t know. We’ll have to see. I liked the idea that, on a very different scale, Joan could endanger their little circle of friends, too. I may pick Lucy [Liu’s] brain about that before the next season starts.

Elementary fans, what did you think of the season ender? Grade the episode via the poll below, then hit the comments to back up your pick!