Not since the days of Marie Antoinette has a cake-bearing woman been asking for such a complete and total takedown as Lucious Lyon’s mother on this week’s Empire.

Leah Walker might present herself as a kindly old grandmother type, but the way she waves a knife in her son’s face, then hisses, “Sorry I was too weak to kill you when I had the chance,” gives me a case of the mean chillakers (a new term I coined just now to describe the feelings I get from the old battle axe’s threats). She does bake a mean confection — or, rather, a half-dozen of ’em — but before we dig in, somebody had better check on Juanita! 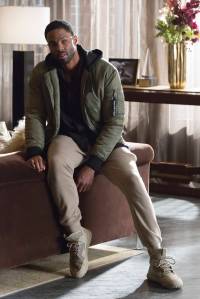 Jamal meets contentious with American Sound Awards’ musical director D-Major/Derek (Tobias Truvillion), and before you can say “baby lock them doors and turn the lights down low” the two sexy fellas are (euphemism alert) pushing and shoving and (not a euphemism) making beautiful music together. I’m officially ‘shipping JaMajor, even if it’s all built on a foundation of internal homophobia, music-industry politics and lies we tell ourselves.

Allow me to recap the action from Season 2, Episode 16 — before jumping to some thoughts on what’s ahead from executive producer Sanaa Hamri.

ASA IN THE HOLE | Meeting with D-Major to plan their ASA set, Cookie insists the Lyons need seven minutes, not four. Unfortunately, Jamal, Hakeem and Lucious are all so deeply invested in promoting their own interests/careers that they can’t settle on a unified performance. “Y’all sound like a rack of bitches!” shrieks Cookie, but they’re all left silenced when Andre waltzed in with Lucious’ presumed-dead mother Leah. 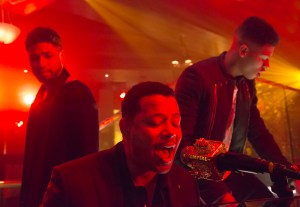 Whaddaya know, though? Later, when Lucious sits down at the piano with his mother, it inspires an idea for the collaboration, and he sells the concept with some startling and startlingly sweet honesty. “I’m still y’all’s father,” he tells his boys, before turning to Cookie. “And you’re still my first love.” The resultant ditty — “Chasing the Sky” — features lyrics from Lucious, Hakeem and Jamal that all make me a little misty-eyed, and apparently D-Major is moved, too. “Mama’s a beast!” he says, before giving Cookie everything for which she asked.

“YOU NEED NOT TO GRAB ME” | Derek says that to Jamal when the two have an argument over the middle Lyon son’s desire to perform a new single at the ASAs — but he’s only talking about his arm (wink wink) because seconds later, these two foooooiiiine gentlemen are GOING. AT. IT. (D-Major even stops to lock the door.) Jamal eventually decides that a relationship with the closeted (and still publicly hanging with hot chicks) Derek isn’t worth it. “I worked damn hard to walk in my truth,” he says, and I respect that. Except…oooh the chemistry between these guys is really hard to argue against. So later, after their Leviticus set, when Jamal tells Derek to stop by later, I can’t conjure up any righteous indignation, especially when the producer purrs, “I dont wanna make you do anything you don’t feel comfortable with.” (Please, let’s have some footage next week, Fox, and thanks in advance.) 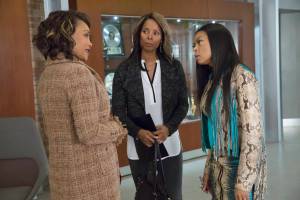 SISTER ACTING | Cookie’s sisters Carol and Candace are at odds, mainly because the latter sibling wants Carol to take her kids back. But it turns out recovering addict Carol is haunted by the fact that back in the day, after Cookie went to prison, she helped Lucious “murder a few people.” (No biggie?!) She wants to confess, but — uh-oh — they’re being eavesdropped on by former Philly beat cop and current FBI agent Tariq. He winds up at a bar where Carol is trying to resist a glass of Wild Turkey — and methinks he’s not above seducing her for intel. He might not even have to, given the look on Carol’s face when at the ASA event, Porsha is all, “I’d be jealous if my sister had everything and I had nothing.”

BYE, BLOGGER | Remember how it was Harper who spilled to Andre about Leah still being alive? Well, Andre drops that deet into his “Heeeere’s Grandma!” reveal, and next thing you know, she’s in a limo with Thirsty, thinking she’s headed to an interview with the Empire CEO. But nope, they wind up on the wrong side of the tracks, under a bridge, and she’s not even panicked. “Lucious should know I can’t be threatened or bought,” she grumbles, and Thirsty counters that, “I wouldn’t touch a hair on your head.” As he lets Harper out onto the curb, though, she’s abducted violently and horrifyingly by a pair of Thirsty’s thugs, and I sense the high heel that falls off her foot is the last we’ll see of her.

THE RED(-HEELED) WOMAN | Rhonda visits Hakeem’s babyproofed pad with Anika, and when a box of infant supplies almost falls on her,she has a flashback to her tragic fall — and remembers she was pushed. Later, back at Anika’s, she spies her buddy’s red-heeled shoe — and has a horrific awakening that the woman who’s been offering her a crash pad may be the one responsible for her losing her baby. Except… if it plays out that way, it’s a little too bland-basic for Empire, no? So I fully expect a more twisted end game — and Anika being exonerated. You? 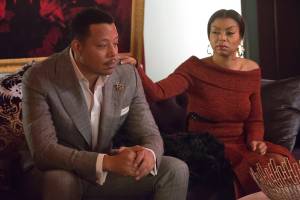 GRANDMA’S ABOUT TO GET RUN OVER BY A REINDEER? | Once Leah’s back in the picture, she presents herself as innocent and a little vacant — even sharing a moment with Lucious at the piano. Her son, for his part, explains to Cookie that everything in the “Boom Boom Boom Boom” video was true — except Leah’s gun had no bullets when she pointed it to her head and pulled the trigger. “I need all of you to understand how dangerous she really is,” he pleads. And at the end of the hour, we see he’s not exaggerating. Leah bakes him a collection of cakes, wakes him in the night, and practically threatens his life if he doesn’t eat up. She still resents him sending her away for 21 years, but perhaps she doesn’t realize that she’d be better off out of Lucious’ sight altogether.

Now, a few thoughts from EP Sanaa Hamri, who directed the Season 2 finale…

TVLINE | Should we be at all suspicious of Lucious’ intentions with Cookie? He seems to be really getting her guard down.
The Cookie and Lucious rekindling is something we see them struggle with as they try to keep their family and their company together. And we’ll see as we come toward the season finale, as they get closer together, what that means. There will be certain situations that will test whether they can make it or not. Lucious is a mastermind of thinking way ahead — and some of the moves he makes for the empire may seem heinous at the time. But with that said, I don’t think he can fake the emotion of love.

TVLINE | Kaitlin Doubleday teased to us last month to expect a “dynamic, scary, insane, crazy” finale reveal regarding the identity of the person who pushed Rhonda down the stairs. What can you tease about that?
Directing the finale was completely, as Kaitlyn described, crazy, insane and utterly unbelievable. The storylines are so twisted and intricate and well thought-out by [showrunner] Ilene Chaiken that we were able to, in directing these scenes, bring out the truth of the situations. We’re going to find out a lot of things, and they’re not what you’d expect. And that’s what I love about Empire – those twists and turns.

TVLINE | Earlier in the season, we saw Anika in blonde wig, pretending to be Laura’s Uber driver, acting crazy. But given all we’ve seen of her, is it too obvious that she turns out to be the person who pushed Rhonda?
Anika is a very complex character who is, at times, a villain. But she has to fight for her own life. She is pregnant, she has to win in the midst of all the Lyons. She’s literally in the lion’s den, but carrying something they all covet. Anika has so much up her sleeve and she is a very intricate character. Everybody’s gonna have a really fun ride. 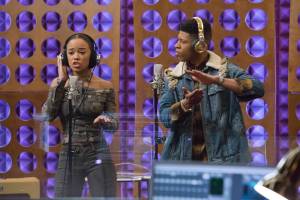 TVLINE | And we saw tonight Hakeem choosing Tiana as a duet partner – much to Laura’s chagrin. Did he propose to Laura prematurely?
Hakeem’s trying to be a man, trying to step up his game, against all odds. He has all these bad habits he inherited, being born with a silver spoon in his mouth. But he’s making a mistake all of us have seen our friends make. People marry too young. Who can’t relate to that? As humans we make those mistakes, and we see why he wants to do this. Laura seems like a sweet girl. But will it work out? Will he be able to get away from the clutches of the empire — and Lucious?

What did you think of this week’s Empire? Are you shipping Jamal and Derek? Do you think Harper is dead-dead? And is Leah destined to die?