Like that ad campaign from the early ’80s where diners at fine restaurants had their coffee replaced with Folgers crystals, Fox’s Houdini & Doyle attempts to satisfy viewers who gravitate to high-minded, British crime stories with a period flair (and/or have an unrequited craving for PBS’ all-too-infrequent Sherlock).

In this case, though, even the least refined palate will detect a top note of cheap and joyless imitation that permeates every aspect of this befuddling 10-episode event series.

Oh, sure, on paper, Houdini & Doyle sounds out-of-left-field intriguing: It’s set in 1901 and built around the real-life friendship of master magician Harry Houdini (House‘s Michael Weston) and Sherlock Holmes author Sir Arthur Conan Doyle (Episodes’ Stephen Mangan). Unfortunately, you won’t need to get past the second commercial break of the pilot episode to realize you’re watching the most banal type of procedural, dressed up in garish period costumes and clogged with faith-versus-science questions that get explored with all the depth and nuance of a political debate on The View. 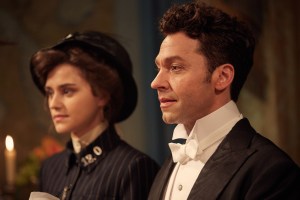 The two episodes I screened found the titular duo teaming up with plucky Constable Adelaide Stratton (Rebecca Liddiard) to investigate a pair of deaths with mysterious undercurrents: In the first, an eyewitness spies a ghost fleeing the scene of the crime; in the second, a man drops dead just moments after questioning a faith healer’s legitimacy and the existence of God.

Trouble is, creators David Hoselton (House, Chicago P.D.) and David Titcher (The Librarians) are content with serving up Scooby-Doo-level mysteries — complete with random clues prompting exclamations like “I know who the killer is!” — and dialogue that would make Velma, Fred and Daphne ask for re-writes. “You’re a doctor! Why would you rather believe that she was cured by God — not by medicine?” Houdini asks Doyle in one of many thudding exchanges designed to underscore the magician’s hard-wired cynicism and the author’s faith in an afterlife and a higher power.

It doesn’t help that Weston’s delivery is so unquestionably modern that Houdini comes off like a time-traveler just dropping in on turn-of-the-century London, nor that his character’s romantic inclinations toward Adelaide spring less from any palpable chemistry or scripted connection, but rather from the grimly simple network mathematics that dictate Single Male Lead + Single Female Lead = Instantaneous ‘Ship. (Let me not even get into the scene that offers one too many close studies of the festering boils on Houdini’s torso!) Is it a compliment to say that, by comparison, Mangan succeeds through sheer innocuousness?

All this is my way of saying that given their historical accomplishments, the late, great Houdini and Doyle deserve better than Houdini & Doyle. And if you’re really hard up for a way to kill a few hours, don’t forget that the latter fella penned a few books that would make much better use of your time.

The TVLine Bottom Line: Like a chained-up Houdini submerged in a tank full of water, you’d be wise to squirm your way out of this debacle as quickly as possible. Better yet, don’t take the plunge in the first place.