The following article contains potential spoilers regarding Season 7 of The Walking Dead. If you’d rather be surprised, look at the flowers or at anything but this.

The Walking Dead is getting the keys to The Kingdom.

TVLine has learned that AMC has issued a casting call for the recurring role of Augustus, a character who bears a striking resemblance to Ezekiel, who, in Robert Kirkman’s series of graphic novels, is the self-proclaimed king of The Kingdom. A doozy of a character, His Highness is described as flamboyant and wise, nice and weird. 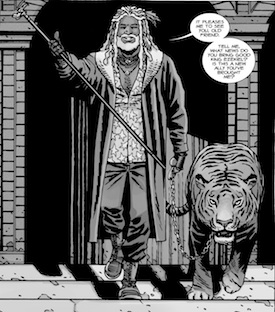 Oh, and in the comic books, the former zookeeper also has a pet tiger named Shiva. You know, just for good measure!

Presuming the show continues to more or less follow Kirkman’s blueprint, The Kingdom will be revealed to be part of a trading network with The Hilltop. When Jesus introduces his buddy, Ezekiel, to Rick, a plan is hatched to take down the Saviors and avenge… well, we don’t know yet who Lucille bludgeoned. But there will obviously be some avenging going on. (Also of note: In the comic books, His Majesty has an affair with Michonne.)

So, keeping in mind that the series is looking for an African-American actor in his 40s, who do you think should get the part? Hit the comments with your casting suggestions!