Next up for Angela Bassett: American Horror Story: Washington D.C.?

Late Friday, Scandal leading lady Kerry Washington shared on Instragram the following photo of the Oscar-nominated actress on the ABC drama’s set. “Final #fraturday of the season,” Washington wrote. “#ScandalFam basking in the glow of the one and only [Angela Bassett].” 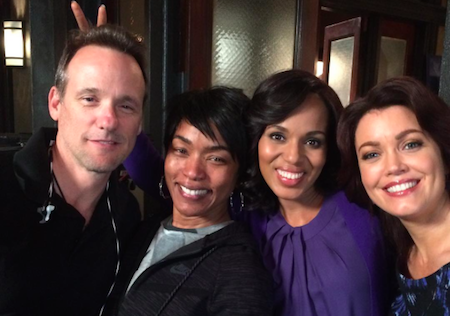 Alas, Bassett was not in the OPA offices filming a guest stint. Rather, an insider tells TVLine that she was merely shadowing co-executive producer Tom Verica (pictured, far left) as he directs the Season 5 finale.

Perhaps Bassett is planning to helm an episode of Scandal herself in Season 6?