In the wake of Laurel Lance aka Black Canary’s vicious death at the hands of Damien Darhk, Team Arrow is down a man, and at a critical time. Might that tragic setback, coupled with a sense of empathy, nudge Felicity back into the fold?

Executive producer Marc Guggenheim tells TVLine, “There are two issues” at play for Felicity, who exited the team shortly after ending her engagement to Oliver. “She’s broken up with Oliver and she’s also broken up with the team essentially. And in Episode 19 [‘Canary Cry,’ airing Wednesday, April 27], we’ll see the undoing of one of those decisions.”

And yes, there is an Arrow reality where Felicity resolves one split and one split only. “One does not mean the other is going to happen,” showrunner Wendy Mericle told TVLine as part of our May Sweeps/Finale Preview Extravaganza. “She could come back to the team and that does not mean that she’s back together with Oliver.”

At the close of the March 30 episode, “Beacon of Hope,” Thea tried to coax Felicity into returning to the team, after seeing the tech whiz ably and enthusiastically fend off that bee-yotch Brie Larvan’s assault on Palmer Tech. Felicity, though, held her ground, indicating that she sees a way for her to offer “hope” to others by way of life-enriching next-gen biotechnology, such as the chip that allowed her to walk again.

Circling back to the recently touched-upon issue of Felicity secretly synching with Team Arrow during her and Oliver’s time in suburbia, Mericle notes, “We started off this season with Felicity really wanting to come back and do this because she herself enjoys this kind of vigilante lifestyle, but that is separate from Oliver. In [the Season 4 premiere], he didn’t want to; it was more about her making herself happy than anything else. So she’ll be grappling in some ways with that.

The coming episodes “will echo [the premiere] in terms of where a lot of the characters end up,” the EP adds, “specifically Oliver and Felicity.”

Guggenheim says of the “Olicity” sitch, “People will have to see if things change or not change” as Season 4 winds to a close. He then reiterates, with regard to the series’ latest death, that which was shared in TVLine’s post mortem Q&A: “We never had to kill Laurel to make Oliver and Felicity a couple. That is really independent from the romantic history that Oliver and Laurel had, and a completely different set of dynamics.” 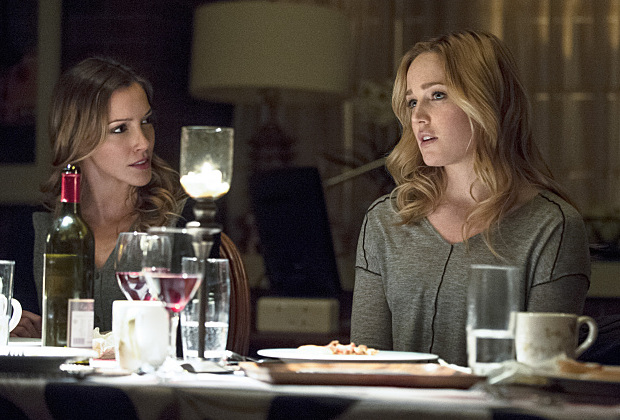