You could put Supergirl under the Black Mercy’s spell a dozen times, or pump her full of Red Kryptonite, and you still wouldn’t wind up in an alternate universe where she willingly works alongside Cat Grant and Maxwell Lord.

But desperate times call for desperate measures, as seen in the CBS drama’s penultimate Season 1 episode. With most of National City succumbing to Non’s new initiative, Kara faces a whole — forgive me — myriad of problems in Monday’s installment, forcing her to align with Max and Cat, the only two denizens who aren’t affected by the signal.

Via the DEO’s hologram of her mom, Kara finally learns that Myriad is a program designed to “save” the world, the same way that Astra tried to save Krypton. Once the people of National City are brainwashed to have the exact same goals, Non believes they can solve all of Earth’s woes — y’know, all those really simple problems like famine and climate change.

Of course, Non (and his newly resurrected partner in crime, Indigo) aren’t merely out to redeem the planet. They’re also gunning specifically for Supergirl, with the ultimate goal of putting her in an intergalactic grave. But before they can kill Kara, they need to break her down with the mightiest of emotional gut punches.

First, in the CatCo offices, Non possesses Winn, James and one of their female colleagues to freefall from the skyscraper’s balcony, giving Kara only enough time to save two of them (and you should have no problem guessing which duo she chooses to rescue). But if watching one of her co-workers die isn’t brutal enough, being forced to battle her brainwashed sister surely is. 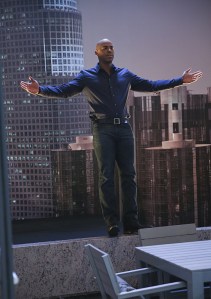 But let’s back up a little. While Supergirl, Max and Cat brainstorm how to shut down the Myriad initiative — fortunately, Max’s plan to level National City with a WMD is shot down — Alex and J’onn continue their fugitive lifestyle all the way to Midvale, where Eliza Danvers lives. With the help of J’onn’s shapeshifting abilities (and a blonde wig that looks fabulous on Chyler Leigh, should she ever think of dying her ‘do), the DEO bosses make it safely to the suburbs, where they plan to load up on supplies before moving on to Project Cadmus.

That is, until they learn the havoc that Non is wreaking in National City, at which point Alex and J’onn decide they must go back and help Kara defeat Myriad — easier said than done, of course. Upon returning to their usual stomping grounds, Alex and J’onn quickly encounter Indigo, and they learn that even a massive explosion is no match for the blue nemesis.

What’s more, Alex gets kidnapped by Indigo, is forced to wear a Kryptonite-laced suit and becomes possessed by Non, who pits sister versus sister in the final moments of the episode. Although Supergirl initially refuses to fight her sibling, she isn’t given much of a choice, as “Alex” threatens to off Kara with the same sword that killed Astra. The Danvers sister lunge for each other, and… we’ll have to wait until next week’s season finale to see the outcome.

Also in the episode:

* Cat and Maxwell turn the flirting up to 11, leading me to wonder which relationship name is less terrible: Caxwell or Mat?

* As Alex and J’onn prepare to leave Midvale for National City, Alex comes thisclose to telling her mom that Jeremiah might still be alive — but J’onn stops her just before she can spill the hopeful beans.

* Though it’s impossible to rank all of Cat’s celebrity name drops, this one definitely cracks the Top 10: “Call Harrison Ford and tell him once and for all, I don’t date older men.” Supergirl, I love you most when you make meta jokes. (If you’re puzzled, let me save you a Google: Cat’s portrayer, Calista Flockhart, is married to Ford in real life.)

OK, your turn. What did you think of Supergirl‘s second-to-last Season 1 outing? Hit the comments with your reactions to the episode!