For Michael Raymond-James, this past winter was a Game of Silence in multiple ways.

In NBC’s midseason thriller of that name (previewing Tuesday at 10/9c, before moving to its Thursdays-at-10 time slot), the Terriers alum plays Gil Harris, the former childhood BFF of a rising star attorney (Revolution‘s David Lyons) whose perfect life is put at risk when a tragic part of their shared past ignites a powder keg of a problem in the present.

Then, upon wrapping Game of Silence‘s 10-episode freshman run, MRJ slipped up to Vancouver to film a top-secret, crowd-pleasing return on ABC’s Once Upon a Time, for last month’s 100th episode.

Here, Raymond-James — who this summer will be playing Cat on a Hot Tin Roof‘s Brick, in a Massachusetts staging — shares some of Game of Silence‘s secrets as well as his take on Once‘s Neal/Emma “reunion.”

TVLINE | For starters, what drew you to this project?
It’s not a typical network show. It’s very serialized. It’s not a procedural. There are plenty of network shows that are serialized — I’ve been on them before, as you know — but the weight of the material here gives an actor so much room to make interesting choices. There’s a million ways to do any given scene, as opposed to, paint-by-numbers characters, storytelling. That was an immediate draw.

TVLINE | At first blush, some might call the childhood secret that’s the catalyst for this story “dark,” but it’s actually more “tragic.”
I agree. Yeah, it is tragic. I mean, you’re talking about children who in the nine months that they were in lock-up, in a juvenile detention facility, had their future robbed from them. Oprah has this saying that I think is totally appropriate, that even if a rape victim survives the trauma of that encounter, you’ve killed who they may have become, and their life is now a different thing. [For Gil and his fiends] it’s clear that there was abuse that took place. 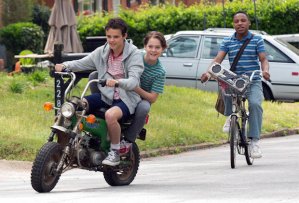 the characters in the flashbacks to be so young. It seems like they’re probably going to be revisited throughout at least the first stretch of episodes, as the story unfolds.
Throughout the entire season, in fact. Because the past is never really the past, particularly with these characters. It’s always there, it informs everything that happens, so it’s important to check back in and see where motivations come from for things that we’re doing now.

TVLINE | When a meaningful part of the story is told in flashback, played by different actors, how do you allow that to inform your performance and your knowledge of the character? I know you can just “read the script,” but did you ever eavesdrop and see what “young Michael Raymond-James” is doing as Young Gil?
Yeah, I have done that, and Young Gil (Judah Lewis, on back of mini-bike above) is just a fantastic actor. But for me, it was more about the arc of the character, as opposed to any particular mannerisms or whatever that he displays. I knew right off the bat where it was going, so we have a shared history, essentially.

TVLINE | What would you say is distinct about Gil’s relationship with each of the two guys (played by Lyons and Rescue Me‘s Larenz Tate), as well as with their friend Jessie (The Unit‘s Bre Blair)?
When we were young, the Jackson character played by David Lyons might have been my closest friend in that group. But [after juvie] he moves away, 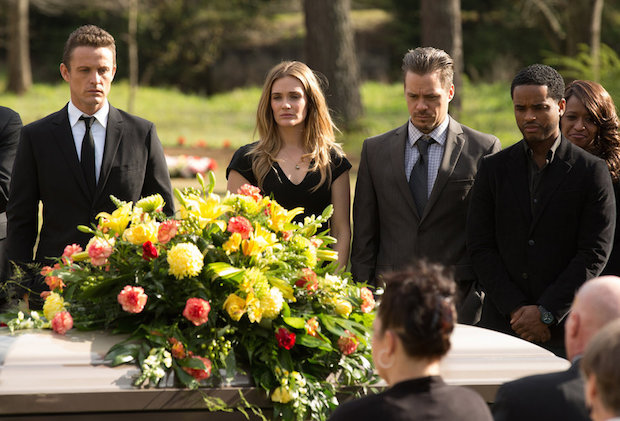 and Shawn, played by Larenz Tate, became my best friend from that point on. We lost track of Jessie for a bit, which we’ll fill the audience in on later, but then she comes back into our everyday world.

TVLINE | I originally wrote down the question, “Would you consider Gil the hothead of the group?” Then I crossed it out, to ask: Would you consider Gil the most impetuous of the group, as adults?
What I think happened with Gil, as a result of the tragedy that took place, is he’s got a quick trigger. One thing I spoke to Dave Hudgins (who adapted this from the Turkish series Suskunlar) about when we were talking about doing it, was that Gil’s got a hurricane inside of him. There’s all this trauma that has never been dealt with, so he’s a bit of a case of arrested development, in terms of he doesn’t know what to do with all these emotions that he has. He’s never gone to therapy. He’s never sought help for PTSD or anything like that, so that hurricane is constantly churning inside him. You don’t know, at any given moment, when something might trigger an explosion.

It’s really interesting because I’ve been examining Cat on a Hot Tin Roof recently — I’m in New York right now for a meeting with the director [of an upcoming staging at the Berkshire Theatre Festival] — and there are a lot of secrets there that are under the surface there. One of the things Maggie the Cat says to Brick in Act I is, “If a house is on fire, you can’t turn away from it, lock the door and act like it’s not on fire anymore” — that secrets that have been held onto too tightly can become malignant after a period of time. It was so erudite and concise in only the way Tennessee Williams can write it, but that one little passage zeroed in on what I think is a central theme of Game of Silence.

TVLINE | What’s sad about the therapy thing is that a female in this position might not think twice about going to seek help, but a guy — especially one with any sense of machismo or whatever — would insist, “I don’t need therapy. I’m not sharing this.” I think it’s your character that at one point even says….
“I’d rather die.” “I’d rather die than have anybody know what happened to us.” There’s a certain amount of shame. When you carry around these feelings, when the confusion from that time has never been dealt with, you don’t know how to handle it. You don’t know in what “box” to put that inside you. And so, it’s always just there, around. It informs everything you do. It’s really tragic, going back to what you said initially. 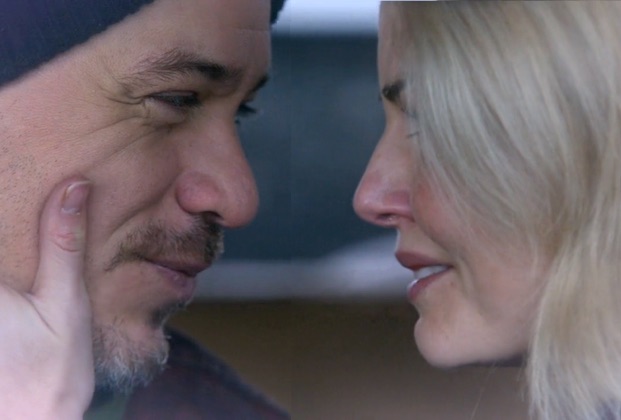 On a lighter note, how did your “surprise” Once Upon a Time encore come about?
[The idea of returning] had been broached before, but with everyone’s schedules it’s hard to find windows. I’ve been working pretty consistently the last couple of years, so I didn’t have a lot of time. But when their 100th episode came up, I was finishing up Game of Silence and I did have a window that they were able to work around. I missed the shooting of the actual episode, but they made accommodations to have me shoot the scene with Jen [Morrison] after they had moved on to a few episodes beyond that at that point. It worked out, and I’m glad it did. It was fun to do and it felt like a nice little bookend to the character.

TVLINE | They ultimately let the cat out of the bag, but did you find some fun in the top-secrecy of it all?
[Laughs] Yeah, I liked pretending to be a “secret agent.” And I took pride in the fact that we were able to keep a lid on it until almost the very end. I know you were worried about the Vancouver paps [spoiling my return], but I was happy we were able to elude them entirely.

TVLINE | What was your read on the conversation Neal and Emma had there in the Bug? Do you feel he was endorsing her new romance and her pursuit of Hook in the Underworld, or not quite?
I think Neal has unconditional love and affection for Emma. She’s the mother of his child and his true love, regardless of whether he was for her or not. I feel it’s a completely unconditional love, and he just wants to be supportive of her. He genuinely wants her to be happy. And if that means being with someone else, then that’s what he wants.

TVLINE | After all, having moved on to a “happy” place and all, it’s not like he himself is an option.
Exactly. He’s not running for that particular office anymore. [Laughs] So yeah, I think he genuinely wants her to be happy. She’s the mother of his child, and a happy, content, fulfilled mother makes for a better childhood.

TVLINE | I said in my column that I was surprised that back in Season 3 they didn’t play that triangle harder — have Emma torn between a storybook character and this “regular Joe” that she’d only known as a mortal. Is that something you would have been interested to explore?
To an extent. But generally speaking, love triangles aren’t necessarily what I get excited about. It can be a revelatory device to tell other stories, to see the way people respond in situations like that, how they deal with rejection or whatever….

TVLINE | For example, if scorned, Neal could be tempted to turn to his dad for an assist. He’s got the Dark One in his corner, so does he go down that route to “get the girl”?
The reality is we will never know. I have my thoughts on it — and I don’t think that that is Neal’s style. Neal devoted his life and his being to turning away from that. He’s somebody who could have lived with the pain of that rejection, if it were to come to that, without having to turn to the dark side. Instead he’d use it as a stepping-stone to grow. That’s my take on Neal.