Adapted from the Norwegian drama Øyevitne, the series explores a grisly crime from the perspective of those who saw it happen. Christie will co-star as Ryan Kane, who, after committing a series of passion-fueled murders, will do anything possible to escape detection. As he hunts for the two eyewitnesses and attempts to mislead Sheriff Helen Torrance, a sinister game of cat-and-mouse ensues.

* Someone get Khloe Kardashian a kocktail: FYI Network has cancelled her chatfest, Kocktails with Khloe, after just 14 episodes.

* 90210 alum Trevor Donovan has been cast in Million Dollar Quartet, CMT’s upcoming drama about the birth of rock ‘n’ roll. He’ll play Eddy Arnold, the real-life country music phenomenon who had a profound influence on Elvis.

* Australian actress Bella Heathcote (Neighbours) has joined The Man in the High Castle‘s second season in the series-regular role of Nicole Becker, a young, Berlin-born filmmaker who crosses paths with Luke Kleintank’s Joe.

* DreamWorks has revealed a first look at Trollhunters, its upcoming Netflix series from Guillermo del Toro (The Strain), in which the residents of the fictional suburb of Arcadia discover that the world beneath their hometown is as vast and mind-blowing as anything on the surface. View it below: 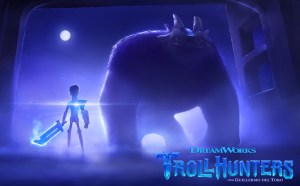