Justin Hires would like you to understand these words coming outta his mouth: “No one wants to see me do a Chris Tucker impersonation.”

The star of CBS’ Rush Hour (premiering Thursday, March 31 at 10/9c) — from executive producers Brett Ratner (who directed the original 1998 action-comedy), Bill Lawrence and Blake McCormick (Cougar Town) — is not interested in some second-rate adaptation of the beloved Tucker/Jackie Chan film trilogy.

“[Chris Tucker]’s already done Chris Tucker and he did it brilliantly,” he tells TVLine. “I knew I had to bring myself to this role.”

Indeed, Hires is thrilled to reinvent a character once played by one of his heroes, who he first saw in 1995’s Friday and thought “was one of the funniest people” he had seen in his life. “I thought if I could be half as funny as this guy, perhaps I could have a career in Hollywood, and that’s exactly what I am: half as funny!”

Below, Hires discusses the newly agile Detective Carter, what it was like to meet Tucker (twice!) and his bizarre connection to Kevin Hart.

TVLINE | How important was it for you to differentiate your version of Detective Carter from the version we’ve seen in all three films?
It was extremely important. I’ve been doing stand-up comedy for almost nine years, and when you’ve been doing it for that long, you develop your own comedic voice. I knew the success of this show relied on two things: for me and Jon Foo (who plays Lee) to bring our own personalities to the characters — for us not to do a Chris Tucker or Jackie Chan impersonation — and our chemistry.

TVLINE | Did you have the chance to speak with Tucker at any point during production?
No… I have, however, met Chris Tucker twice. When I did Stomp the Yard, [he] came on set one day and I said “I just want you to know that I’m standing next to you and I’m hoping your aura makes me funnier.” He started laughing and said, “You’re a pretty funny man.” Then about four years ago, I was performing at the Comedy Store [in L.A.] and [he] was sitting in the back. I stopped my show and said, “I just want you to know that you’re literally one of the reasons that I got into comedy. I think you’re hilarious and I love you.” Chris was like, “Ha, I love you too, man!”

TVLINE | Unlike the films, Carter doesn’t just serve as comic relief. He seems every bit as capable of fending off bad guys as Lee. Was that intentional?
That’s a question I asked the director. I know in the original films that some of the humor was that Carter wasn’t as agile as the Lee character. However, they told me, “If you’re athletic, just do it.” My first two loves are martial arts — I have a first degree black belt in karate — and comedy. I have that natural athleticism in me, and that’s something that’s different [than] Chris [Tucker] — not in a bad way, but my comedy is very physical. 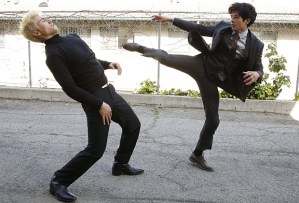 TVLINE | Was co-star Jon Foo, who’s a professional martial artist, able to give you any pointers when it came time to film those fight sequences?
He taught me that real martial artists don’t have belts. [Laughs.] I haven’t practiced martial arts since maybe middle school; he’s been training nonstop and it shows. He showed me how a real martial artist fights on a set and it was a pleasure to watch.

TVLINE | Carter is also grounded by his friendship with Didi (played by Dexter vet Aimee Garcia), who essentially takes the place that Tania (played by the late Elizabeth Peña) had in the first film. What can you tell us about that relationship? 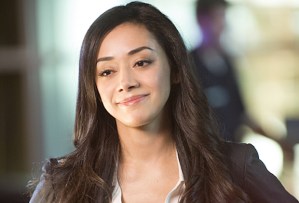 That’s my best friend on the show. That’s the way we’re setting it up, but I think… if we’re fortunate enough to have more seasons, that’s a relationship that could grow into something. As of now, she’s my ex-partner.

TVLINE | Much of the humor of Rush Hour draws from the culture clash between Carter and Lee, who’s fresh from Hong Kong. Obviously though, some of the jokes you were able to get away with in 1998 won’t slide in 2016. How does this version address their differences without offending anyone?
I think everyone in Hollywood is a little bit more sensitive to people’s backgrounds and cultural upbringings now, and I think in the dialogue we try to make sure that nothing is said that is going to be completely disrespectful to the other person’s culture. The good thing about a joke — a good joke — is that people allow things to slide. It’s when you say a joke that isn’t funny that the PC police come out in droves.

TVLINE | In one of the many promos CBS is running (as seen below), Lee tells Carter that he is already corrupting his soul. How might we start to see Lee “corrupt” Carter?
I think, if anything, Lee rubs off on Carter more so. Carter is just trying to solve these cases by any means necessary, however he does respect Lee tremendously. Lee gets the job done and he’s humble about it, and we will start to see that [rub] off. He’s still Carter, the charismatic, boisterous human being that he can be, but at the same time he realizes that you don’t have to be so loud and cocky to get the job done.

TVLINE | And what would you say to potential viewers who are on the fence about tuning in for another TV reboot?
We have drones, explosions, gun fights… it’s almost like watching a mini-movie every week on television. I completely understand the skepticism, but when people watch I think they’re gonna say, “You know, this is alright!” I think [they’re] going to be pleasantly surprised.