It was a superhero match made in crossing-universes heaven: During Monday’s Supergirl, the Girl of Steel and The Flash made each other’s acquaintance in the comic book equivalent of a meet-cute.

When Silver Banshee’s scream nearly sent Kara plummeting to her death, Barry Allen (played by Grant Gustin) raced in — from another Earth! — for the save, and the two heroes quickly hit it off. (Apparently, anyone who can follow the concept of multiple Earths is a friend for life.) Without The Flash‘s Cisco or Dr. Wells around, Barry easily slipped into Kara’s small group of confidantes while trying to find a way back home. In the meantime, the new pals worked 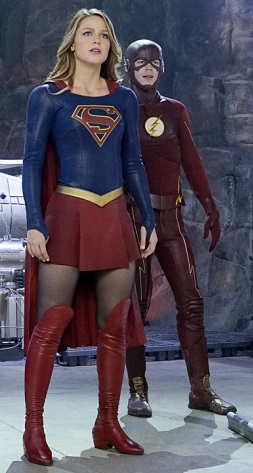 together to defeat baddies Silver Banshee and Livewire; their insta-chemistry, both in and out of their costumes, sparked James’ jealousy. But it was Barry’s romantic advice that finally found Kara moving forward in her relationship with her colleague/friend. “I’m going to miss you,” she said as she bid adieu to Barry by throwing him back to his Earth at Supergirl speed. (We’ll miss his natural and animated presence on the CBS series, too.)

Given the creative success of The Flash’s visit, producers are hopeful about more crossovers with their CW dramas, like Kara making a trip to the speedster’s show (“We would love that,” executive producer Greg Berlanti says) or a Flash villain’s doppelganger showing up on Supergirl (“We’ve just talked about that recently,” Berlanti reveals). And as EP Andrew Kreisberg notes, Legends of Tomorrow‘s time-traveling spaceship “can do and go anywhere,” even to different Earths.

In discussing this crossover’s genesis, Berlanti also hints at the idea of Supergirl and Green Arrow interacting, saying, “From the day we cast Melissa [Benoist], the notion of her in scenes with Grant [Gustin] – or someday maybe in the best of all worlds with [Arrow star] Stephen [Amell], as well – it’s exciting to think of them on screen together.”

Below, Berlanti and Kreisberg talk about the episode’s big Supergirl-related cliffhangers, including that liplock, Non’s plans for National City and more.

KISS AND TELL | Kara finally planted a smooch on James, but as she awkwardly tried to get a read on his reaction, Non activated Myriad. Cue the photojournalist wordlessly walking out the door and down the street… along with everyone else in National City. The juxtaposition “felt like the best kind of Whedon-esque pathos,” Kreisberg says. As for why Kara was the one to make the first move, “Barry’s advice about when to go slowly and when to move fast really resonated with her,” the EP explains. “She finally realized, too, they’ve had so many fits and starts throughout the course of the year, and so much of it was because one of them didn’t stop talking and just act.”

BAD GUYS WITH A POINT | Non’s Myriad scheme is not without its merits. In the next episode, the seemingly evil Kryptonian “gives a speech where he talks about, ‘What has your free will gotten you?'” Kreisberg previews. “‘It’s gotten you a planet full of reality TV shows and politicians who can’t stand each other, and you’re all sitting by as global warming is coming to destroy your planet. What if everybody was working in lockstep? What if everybody was moving in the same direction? What if everybody was working together? Wouldn’t that be better?'” Back on their home planet, Kara’s aunt tried to put Myriad into action. To her dismay, she was thwarted — and then everyone was killed in Krypton’s destruction, which just goes to show, “at least from her perspective, that [her] plan might have saved Krypton and [her] plan can save Earth,” Kreisberg points out. 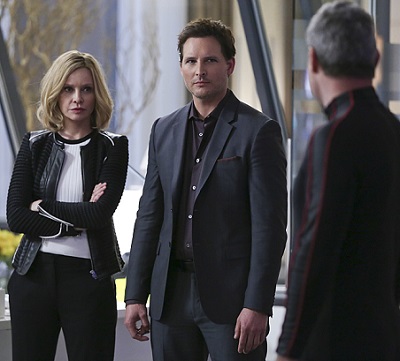 UNEXPECTED ALLIES | Kara will not fight Myriad alone, despite its spell over the city’s denizens. Help will come in the form of “a couple of surprising players that you wouldn’t expect to be the two people who are completely unaffected,” Kreisberg teases. (Perhaps the promo photo to the right offers a hint at their identities?)

UNMASKING HEROES | If Cat was so easily able to decipher that Barry is The Flash, then how can she still be in the dark about her assistant’s secret identity? “There’s a number of people that assume that she does know and just doesn’t say anything,” Berlanti notes. “Both are safe bets. We haven’t firmed up if and when we [will] clarify that point. I think it’s kind of enjoyable to appreciate the show both ways.”

What did you think of Supergirl‘s crossover with The Flash? Grade it via the poll below, then hit the comments to back up your pick!