Does Very Special Agent Tony DiNozzo have a sister…?

CBS’ NCIS raises that question tonight at 8/7c, when Robert Wagner reprises his role as Anthony DiNozzo, Sr. — who this time around shows up not alone, but in the company of a woman who believes he is her father.

“He connects with this homeless woman (played by Big Love‘s Melora Walters) who takes him on this bit of a journey,” previews NCIS showrunner Gary Glasberg. And as Senior susses out the situation with his namesake’s help, “It gives us a bit more insight into this relationship with his own son.”

While Glasberg touts the episode as delivering “a very heart-wrenching storyline” for father and son, there is, as usual, “some humor and some fun that goes along with that. Robert J. did a really lovely job; he continues to blow us away at times.” 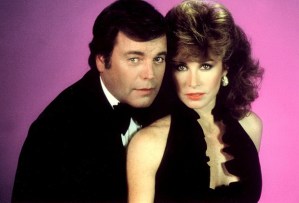 ever guesting as part of a Hart to Hart reunion on TV’s most watched drama (a recurring question most recently put forth by TVLine reader Nicholas B.).

“I was a huge Hart to Hart fan and [Wagner] knows that, so yeah, we talk about it,” Glasberg shares with a chuckle. “It wouldn’t surprise me if at some point down the road, now that I’ve got a two-season pickup, it happens” — even though DiNozzo Jr. is set to be written off in the Season 13 finale, when series regular Michael Weatherly makes his final appearance. “Who knows. Stranger things could happen!” Glasberg shrugs. “But [Wagner] knows I’m a fan, that’s for sure.”