Early into tonight’s Agents of S.H.I.E.L.D. (ABC, 9/8c), it is revealed that Bobbi Morse and Lance Hunter have never been on a proper vacation — and suffice to say, what they endure after stowing away on Gideon Malick’s jet is anything but.

From go, the “HuntingBird”-centric episode toggles back and forth between “the past, the present… all over the place,” shares Nick Blood, who plays Lance. As such, Adrianne Palicki says the intense hour “definitely has a different feel” versus typical S.H.I.E.L.D. fare.

Upon arriving at Malick’s destination, where Russian delegate Anton Petrov plans to lay out his plan for an Inhuman “sanctuary,” Bobbi and Lance get ensnared in an assassination plot. Separated and intently interrogated, they each do their best to cover their own tracks while doing what’s possible to protect the other from retribution.

Because of their longtime, personal relationship, “They strengthen each other but they’re also each other’s weaknesses,” Palicki notes. “As a soldier, you shouldn’t go into battle with any kind of leverage — but for Bobbi, Lance is leverage.”

Especially since, as Blood recently shared on the ABC series’ set, Lance’s loyalty has always been more to Bobbi than S.H.I.E.L.D. as a whole, “I actually don’t think he would be there if it wasn’t for Bobbi. After she got hurt, even more so,” says Palicki. “It’s that ‘protection’ thing.”

That said, this is Lance and Bobbi we’re talking about, so even during their worst of their ordeal, they can be counted on 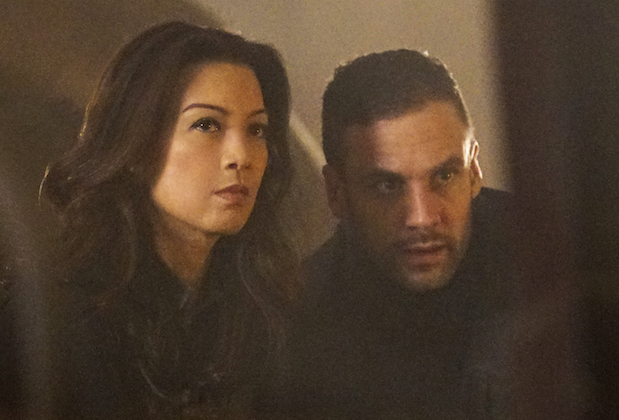 to crack wise with their captors. (For one, expect to learn way more about mushroom-based cuisine than you ever anticipated.) “The big thing you see is how strong they are and determined they are as people,” says Blood. “But you also see how Hunter, even in the most desperate situations, tries to make things light.”

Those quippier moments keep things fresh for the actors, who are poised to parlay that fun dynamic into Marvel’s Most Wanted, a pilot currently under consideration for ABC’s 2016-17 TV season.

“The most fun is playing off their different approaches to things,” Blood raves. “Bobbi is the one person who can actually push Hunter’s buttons.”

“And she likes to push his buttons!” adds Palicki with a laugh.

All told, Blood says that Lance and Bobbi’s mission — to gain additional intel on Malick’s grander plan — is “pretty successful,” though not without its setbacks.

As Palicki warns, “There’s a big surprise at the end of the episode. A big tearjerker, that’s for sure.”