The following story contains spoilers from Sunday’s The Walking Dead. Proceed at your own peril.

The Grim Reaper took aim at Merritt Wever‘s Denise in this week’s Walking Dead, but the real twist was how the dear ol’ doc croaked. Unlike in Robert Kirkman’s comics, which saw the zombie-bitten character die at the merciful hands of Michonne, Denise was executed by Savior Dwight, who shot an arrow directly into her right eye socket.

In the following Q&A, the zen-like Wever — an Emmy winner for her seven-season run on Nurse Jackie — reveals when she learned Denise was getting whacked, explains why she didn’t beg producers to keep her around longer and admits that she was rather pleased that Denise didn’t get a traditional zombie sendoff.

TVLINE | No pun intended, did you see it coming?
[Laughs] I did. I knew it was coming. I knew that I was going to only be on the show for this season. I didn’t know how until a couple before [we shot the episode]. 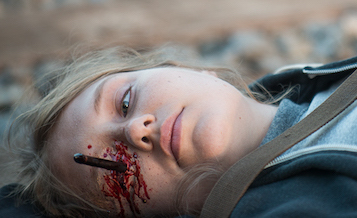 TVLINE | Did you hold out any hope that perhaps the producers would change their minds and keep you around longer? Maybe give Denise an eyepatch?
It’s an amazing place to work. I had heard that it was a really nice set before starting the job, and it’s all true. So it would’ve been an amazing place to [continue working in]. But it was understood all along that it would only be the length of [Season 6] and I didn’t let myself think otherwise. I’m not a hopeful person by nature, either.

TVLINE | What did you think when you learned how she would die?
I thought, ‘Cool.’ In the back of my mind I assumed it was going to be a zombie [that did her in], and I remember thinking that [an arrow in the eye] was a lot less messy and, therefore, a lot easier on me.

TVLINE | How did you shoot the scene?
It wasn’t that intricate. Something like that for [the Walking Dead] special effects team is probably very small potatoes. I saw other people [get killed off] and it was a lot gorier and more intense. Like when Jessie and the kids died. They fit me for a prosthetic and then placed it over my eye. I had to have one eye closed and then they put the [fake] wounded eye with an arrow sticking out over it. It affected my balance a little bit but that’s about it.

TVLINE | Is there any part of you that’s sorry you didn’t get a big zombie death like Denise does in the comics?
Noooo. [Laughs] I was OK. As an actor, I know what that entails, and how many takes it would require and things like that. I was like, “Oh, an arrow through the eye? I can do this.”

TVLINE | Was that awesomely inspiring speech that Denise gave to Daryl and Rosita the writers’ parting gift to you?
That’s a lovely way to think of it. It’s really nice when they send you off that they also give you something nice to do for an episode. But the writers were good to me [throughout the season]. It was a really nice experience.

TVLINE | Did knowing that Denise wouldn’t live to be reunited with Tara make it tempting to overplay the significance of their goodbye?
Yes, it did. I didn’t see that episode [when it aired], so I don’t know if that ended up being the case or not… It’s 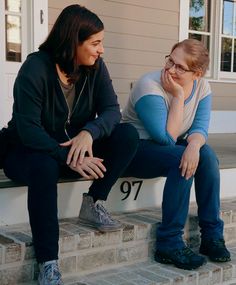 interesting, I probably worked with [Alanna Masterson] the most but it didn’t feel like we worked together much for two people in a relationship. It’s a big show and you get put into situations and those are the given circumstances. There wasn’t a lot of time with a cast this big and stories this big to develop the relationship.

TVLINE | I’m sad we won’t get to see the sibling bond between Denise and Daryl develop more.
I think that was on purpose. It was really nice to work with [Norman Reedus]. It would’ve been lovely to work with him more.

TVLINE | Did you get to keep any props as souvenirs?
I don’t think I [took] anything. But I could be forgetting something. I’m the kind of person who takes a souvenir and then forgets they have it, and then I find it when I move apartments 10 years later. There’s probably a torn off ear somewhere.