You’d think that, after all of their romantic ups and downs over the years, Nashville‘s Rayna and Deacon would’ve at least gotten to celebrate their decades-in-the-making wedding with a little honeymoon. Perhaps sipping frosty umbrella drinks beachside at an all-inclusive resort where the housekeeping staff makes animals out of their towels each evening. Maybe strolling, hand-in-hand, down the romantic sidewalks of Paris.

Heck, we would’ve even accepted a secluded, pants-optional weekend at Deke’s cabin.

But series star Connie Britton tells TVLine that the euphoria from Wednesday’s episode, which finds the lovebirds finally becoming man and wife, burns off rather quickly.

“Basically it seems like the motto of Nashville is: Rayna and Deacon don’t get to be happy for very long,” she says ruefully.

If you need it, here’s a quick recap of the midseason premiere: Despite some hiccups — namely Deacon’s suspicion he’ll ruin Rayna’s life by being a screw-up and Tandy/Maddie/Daphne’s sudden doubt that Deacon is the right partner for Rayna — The First Lady of Country Music and her man get hitched in front of their family and friends (minus Juliette, who’s still in treatment, and Will, who backs out after fallout from his incident with closeted country star Wade Cole).

At the reception, while the happy couple dances into the night, Avery drinks too much and decides he can no longer cover for his absent wife, whom everyone thinks is abroad. Meanwhile, Luke’s son Colt tells a devastated Layla what really happened on the night of Jeff’s death, causing her to hatch a plan to bring down Juliette Barnes.

Below, Britton gives us a sense of what Mr. and Mrs. Claybourne’s immediate future looks like and whether the pair will share a stage before the season ends.

TVLINE | I’m wondering if Rayna at all becomes involved in the plan that Layla formulates at the end of the episode, to take down Juliette?
Oh, no. 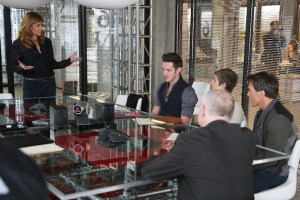 TVLINE | Maybe “involved” is the wrong word — is she affected by it, moving forward? Does it mess with her plans for the label?
Not really. It doesn’t really end up impacting [her]. There’s a moment in one of the later episodes where I think Rayna starts to feel like, “I’ve done so much.” Basically feeling like it’s not all it’s cracked up to be to be a label head. I think part of that is feeling like Layla’s got her own agenda going on. Beyond that, no. You know, in later episodes we actually get into other story stuff. So Rayna doesn’t end up feeling it that much.

TVLINE | In next week’s episode, Riff (played by Shameless‘ Steve Kazee) shows up in town and wants Deacon to go on the road with him. What might Rayna have to say about that, so soon after their wedding?
Well, look, there are always things that happen that I’m like, I wish so much that Rayna and Deacon had a longer time before things start getting crazy. I actually don’t remember what Rayna ends up saying at that point. We shot that episode so long ago. I do feel like we very quickly move out of the la-la land of marriage and into cold, hard reality.

TVLINE | That’s no good. Will we at least get to see them sing together or make music together?
Nope. [Laughs]

TVLINE | You’re killing me here.
I know. Trust me, I’m with you. There is one moment where we’re on stage together, but we’re not actually singing together.

TVLINE | During the wedding episode, Tandy and the girls raise some last-minute objections to Deacon. In your mind, is she open to hearing any of that? Or does she 100 percent believe what she tells them before the ceremony?
I think she does. My feeling is, Rayna really has been through it with Deacon. She’s gotten to a place where she is making a very informed choice for her life. She’s also acknowledging her own part in it, which is that she loves the guy. She can’t get away from him. She’s tried for a good part of her life, so I do think she’s going into this with her eyes open and in the best way that she can… That’s the funny thing about when people are born, when people die and when people have weddings: The foundation of all families and relationships gets a little bit shaken. So that’s what we experience in this wedding.

TVLINE | What episode are you shooting now?
We’re on Episode 20 already.

TVLINE | Throw me a tease about what’s going on in that episode.
All I can say is as I said earlier: Happiness and contentment does not last long for Rayna and Deacon. That’s all I have to say.

TVLINE | Any final thoughts on Rayna and Deacon’s big day?
When I think back to the pilot of this show and all of my ideas of what I thought it was going to be, and looking at these characters and particularly the character of Deacon with Rayna, there certainly were satisfying moments in the wedding… with regard to that, because it did feel like we had built a story and an arc to get to this place. So that was very satisfying.