THE PERFORMANCE | To date, Sarah Paulson showed us a cool, calm and collected prosecutor, diligently getting her ducks in a row in building case against accused murderer O.J. Simpson. But in “Marcia, Marcia, Marcia,” so many of those ducks, plus others, transformed into dominoes that started toppling over in rapid succession, testing the resolve of even the best person.

As Marcia fought battles on multiple fronts, Paulson revealed incremental cracks in the legal eagle’s facade. With every corner of her world slowly crumbling, Clark sought only the comfort of son Travis’ embrace, but instead was met with legal blindsides from ex-husband Gordon. So desperate was she to hold onto her role as mother, Paulson made you feel her plight in informing Judge Ito, “I cannot go late tonight; I have to take care of my kids” — only to then be compelled by her boss to do the exact opposite.

Clark also found herself targeted on superficial levels, as the media mocked her style (of lack thereof). That teed up a sequence, set to “Kissed by a Rose” and dreamily directed by executive producer Ryan Murphy, in which Paulson’s beleaguered alter ego beamed as she underwent what she thought would cure at least one of her ills — “Farrah??” — only to see even that dream dashed upon debuting her new ‘do to the world.

But then came the knock-out blows. First, when F. Lee Bailey laid the foundation for Mark Fuhrman’s downfall, by grilling the detective about his history with the N-word. On the heels of that, Marcia was aghast to learn that her first husband had leaked nude photos to a tabloid. That was the straw that broke this counselor’s back, as she finally gave into tears at the prosecution table, prompting Ito to adjourn for the day.

“I don’t know how to do this,” Clark later copped, slumped to the floor of her office in tears, to colleague Christopher Darden. “I just can’t take it.” And with that devastating series of events passed, our verdict came in: Paulson, a four-time Emmy nominee, has made a case for grabbing gold this September.

HONORABLE MENTION | This week’s Girls gave Zosia Mamet a stunning showcase of unabashed joy, sweet flirtation, crushing disappointment and even wicked nightclub abandon. As we checked in on Shoshanna’s exciting new life in Japan, the flighty twentysomething received a rude shock: Getting “managed out” of her job due to corporate downsizing. While tearfully relaying the news over the phone to her American boyfriend Scott (Jason Ritter), Mamet deftly showed us just how important Shosh’s career and new life had become to her — and how Scott’s failure to grasp that fact turned out to be an unexpected betrayal. By the time Shoshanna wound up nervously donning a vinyl nurse’s uniform at an S&M club with her Japanese crush/boss Yoshi, their kiss was all but inevitable. But as Shosh packed for her flight back to the U.S. the next morning, Mamet used a conflicted expression, then the slight hint of a smile, to telegraph that her character would be defiantly staying put. 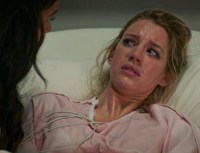 HONORABLE MENTION | Leave it to Jane the Virgin‘s unsung MVP Yael Grobglas to turn the painful process of giving birth – to twins, no less! – into a comedic tour de force. Petra completely lost her cool during labor, allowing Grobglas to unleash a storm of wicked barbs and priceless facial expressions (see: the picture to the right). But there was also a vulnerability to the actress’ performance as Petra found herself facing the unknown, with only Jane by her side. She was even – dare we say it? – kind of sweet while marveling at her daughters. After witnessing Grobglas’ impeccable ability to mix humor and emotion, we can’t wait to see what challenges (and laughs) motherhood will bring for her character.

HONORABLE MENTION | In this

week’s The Real O’Neals, Eileen declared that if son Kenny’s crush didn’t like him back, the guy obviously had no taste. We’d say the same of anyone who isn’t enamored of Noah Galvin, who portrays the freshly out-of-the-closet teen. In “The Real Lent” alone, Galvin made us wince as he took his big brother’s advice and asked “You gay, bro?” to the object of his affection, then made us LOL as his character put on cologne that he hoped suggested he was “edgy, confident, but also like[d] to cuddle.” The actor made us smile ’til our faces hurt as the date sparked a dancetastic fantasy sequence. And, finally, when Kenny was ultimately rejected, Galvin brought us so close to tears that we almost had to borrow his alter ego’s “classy exit line”: “I’ve gotta pee so bad, I can taste it.”