Is it too soon to declare that one “TGIF” sequel series is better than the other?

Girl Meets World, a continuation of the 1993-2000 sitcom Boy Meets World, centers on Riley, the teenage daughter of Cory (Ben Savage) and Topanga (Danielle Fishel), and does not attempt to focus on the adults who fronted the original program. Though appearances by Boy‘s most prominent alumni populated the tail end of Season 1 and the start of Season 2, more recent episodes have moved the focus entirely towards Riley and her maturing friend group; gone are the visits by Shawn, Eric and Feeny, making room for some “very special episodes” about bullying, autism and spirituality in an attempt to provide a family-friendly platform to discuss issues affecting parents and teens today. 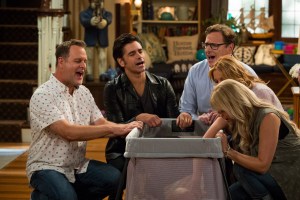 Fuller House, on the other hand, is unapologetically about D.J., Stephanie and Kimmy, the kids of Full House-turned-adults of the Netflix follow-up series. The sitcom in no way tries to provide a modern take on issues affecting families, and appears completely satisfied pretending it’s still 1995 — not that there’s anything wrong with that! — while throwing in the occasional reference to online dating and social media.

Rather than attempt to find out what ever happened to the milkman or the paperboy, Fuller is fully satisfied coasting on the predictability that made its predecessor a hit, as opposed to Girl, which has distinctly evolved into its own entity. Take for instance the decision to start the pilot (aptly titled “Our Very First Show, Again”) not by introducing its central trio (Candace Cameron Bure, Jodie Sweetin and Andrea Barber), but instead by reacclimating with its legacy cast (John Stamos, Bob Saget, Dave Coulier and Lori Loughlin); couple that creative choice with the decision to open with Full House‘s Season 1 title sequence, and it’s glaringly obvious that Fuller is not being written for anyone other than ’90s nostalgics.

This stands in stark contrast to the Girl Meets World pilot, for which a knowledge of Boy was not needed for a new generation to sample and understand its sequel. What’s more, Fuller makes countless references to the characters’ sex lives and features the occasional joke about drug use, making its TV-G rating legitimately questionable whether or not you tend to side with the outspoken Parents Television Council. 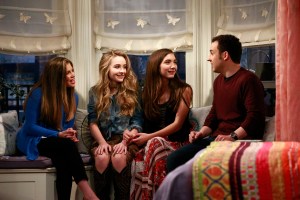 At times, Girl Meets World Season 2 has felt like it’s slowly weeding out Savage and Fishel, who in a show focused on their daughter, become less integral to the overall storyline as she grows up and begins high school (despite the fact that Cory remains her teacher). With Fuller, the concern isn’t whether The Powers That Be will eventually steer the focus towards D.J. and Kimmy’s kids, but whether the show could survive that change in focus and expect a new generation to cling onto kids who feel like they’re a relic of a bygone era.

While it’s perhaps unfair to weigh Fuller‘s inaugural 13-episode run against Girl‘s 50 episodes and counting, it was always apparent that these pickups by their respective cable and streaming networks were in response to a lack of shows of their ilk as the broadcast networks continue to dominate with hipper, single-camera comedies like Fresh Off the Boat and Modern Family. Whether or not they succeed at filling a void is a matter of opinion. With that in mind, we have to ask: Which TGIF sitcom follow-up do you prefer and why? Vote in our poll, then take this discussion to the comments.