Rick and Michonne ended up showing a good deal more skin than was initially intended during their first big romantic encounter in Sunday’s The Walking Dead — and you have Andrew Lincoln and Danai Gurira to thank for that.

When it came time to shoot the climactic scene in which Jesus (Tom Payne) interrupts Rick and Michonne’s morning-after canoodle session, Lincoln recalls asking his leading lady, “‘How are we going to top the kiss?'” The short answer: More nudity!

As the actor explains, Angela Kang and Corey Reed’s original script called for an au naturel Michonne to “cover herself” with a sheet upon jumping out of bed. “Danai said, ‘No, she wouldn’t. She’d go for her sword.’ And I said, ‘Yeah. And Rick would go for his gun. And we’d both be naked.’

“So we campaigned for the butt-crack shot [at the end],” Lincoln adds, proudly. “That wasn’t in the script. We both said, ‘If we’re going to do it, let’s do it.'”

Scroll down for an uncensored look at the, ahem, end result of the actors’ successful bare-bottomed crusade. And for my complete post mortem with Lincoln about the birth of ‘Richonne,’ click here. 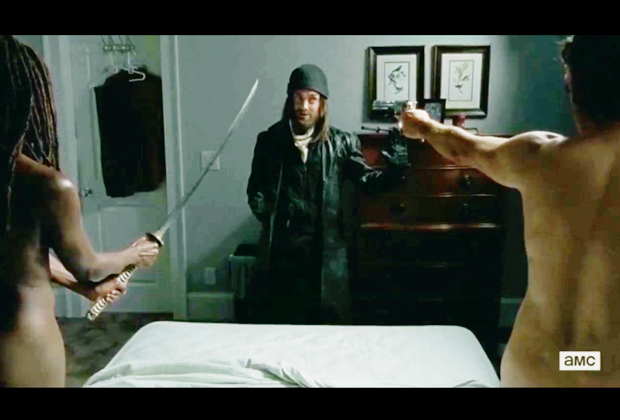