When life gives you lemons, make… a burger run afterwards, and then everything will feel a bit better. That at least was Adele‘s quick fix for the technical issues that blemished her Grammys performance.

The “25” singer took to Twitter Monday night after a number of audio issues interfered with her emotional performance of “All I Ask,” to explain what went wrong from her point of view.

Needless to say, she wasn’t too shaken up about it: 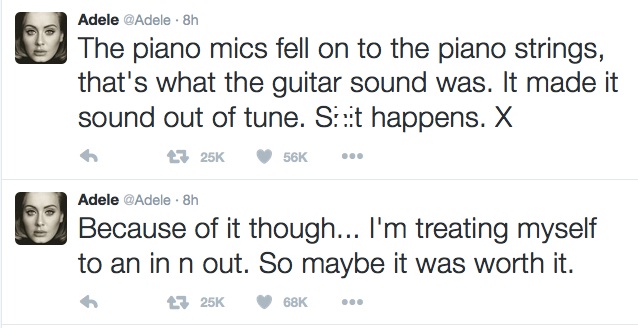 The 10-time Grammy winner’s performance was also interrupted when CBS’ audio gave out for a matter of seconds. According to a CBS rep, “There was a brief five-to-eight-second technical issue that was out of our control.”

What did you think of Adele’s admittedly flawed performance?