If Saturday Night Live‘s 90-minute broadcast doesn’t satisfy your need for sketch comedy on the weekends, Fox just came up with the perfect solution.

The network has greenlit Party Over Here, a half-hour Saturday-night series produced by comedy trio The Lonely Island (Andy Samberg, Akiva Schaffer and Jorma Taccone) and Paul Scheer (The League). 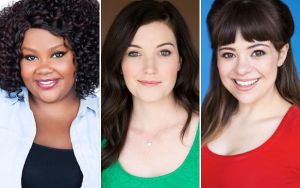 “When we first conceived this idea, we thought of it as a spinoff of Empire,” said The Lonely Island in a statement. “We failed miserably… now it’s much more of a sketch comedy show.”

Added David Madden, president of entertainment at Fox: “The late-night landscape is wildly competitive, and we thought long and hard about the kind of audacious, attention-getting voices we needed. Andy, Akiva, Jorma, Paul and our three stars — Nicole, Jessica and Alison — are the ideal group of talent to do just that. They’re fearless, original and, of course, very, very funny.”

Party Over Here premieres Saturday, March 12, at 11/10c on Fox. Will you be watching?