If you were hoping Arrow would narrow down the list of characters who might be in that flash forward grave, this newly released Season 4 trailer probably isn’t going to qualm your anxiety. 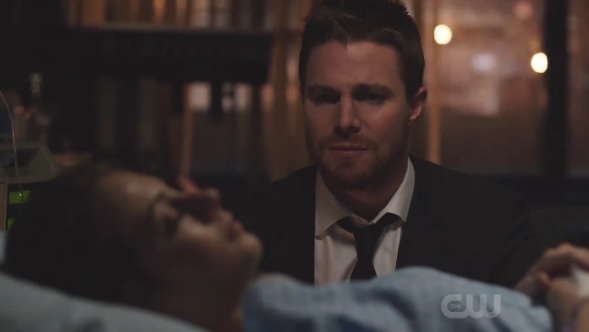 Everyone from a hospital-ridden Felicity and Thea (!) to a bloody Laurel appear to be potential future residents of that cemetery plot.

On the bright side, the preview also offers up a glimpse at some much welcome (Roy! Nyssa!), surprising (Katana!) and truly shocking (Goth Felicity flashback?!) returns.

Plus: Oliver gets competition in the mayoral race, someone finds themselves on the receiving end of a pointed gun and Damien puts an arrow in The Green Arrow.

Press PLAY above to get a sneak peek at the back half of Season 4, resuming this Wednesday at 8/7c on The CW, then hit the comments with your thoughts on the action.