Eagles co-founder and guitarist Glenn Frey, a six-time Grammy winner whose hits included “Hotel California” and “The Heat Is On,” died Monday of complications from rheumatoid arthritis, acute ulcerative colitis and pneumonia. He was 67. 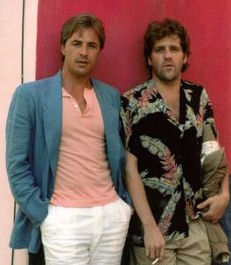 Frey’s 1984 hit single “Smuggler’s Blues” inspired a Season 1 episode of Miami Vice, and even featured a guest appearance by the musician (he played a pilot; see photo, above). It marked his acting debut.

Frey would go on to appear in episodes of Wiseguy, Nash Bridges and Arli$$.

“Words can neither describe our sorrow, nor our love and respect for all that he has given to us, his family, the music community and millions of fans worldwide,” Frey’s surviving bandmates said in a statement on the Eagles’ official Facebook page.