There should be steep discounts on said banners (in the fictional world of The Good Wife, anyhow) come Monday morning. Problem is — as most of us could’ve predicted the minute the never-impressive-as-her-credentials Ruth Eastman started thinking her man could actually be POTUS — they’ve already passed their expiration date.

Indeed, on this week’s installment, Peter manages to visit every single county in Iowa, but after two last-minute snafus — one by himself and one by Alicia — he winds up a distant fourth in the state’s crucial caucus. The only one who seems to be happy is Eli —mainly because he gets to point and jeer and hiss “Toldja so!” at Ruth — although given Alicia’s current disdain for public scrutiny, I’m surprised she’s not downing margaritas in the back of the campaign bus and sending “You up?” texts to her scruffy erstwhile investigator Jason Crouse.

Meanwhile, Jackie and Howard hit a temporary snafu in their late-in-life romance, while Cary makes a long overdue power play. Let’s cut to the details of “Iowa” (aka a far less dramatic installment than the fall finale’s explosive voice-mail revelation). 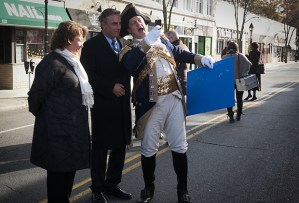 MEAT THE FLORRICKS | We pick up with Eli’s admission to Alicia about deleting Will’s “I love you and I’d give up everything to be with you” voicemail — and she responds with a dish-smashing, “get out of my house!” frenzy. She does not, however, channel her rage into sexytimes when Jason pops by on his way to California (#OpportunityMissed), and instead packs for Iowa, downloads Jane Eyre on her Kindle, and buys a copy of Clem Snide’s “No One’s More Happy Than You” that she plays over and over and over again while looking 50 shades of miserable.

Ruth tries to give some homespun advice about her one stab at true love, about how you can’t change fate, about how “that’s truth” when you don’t know what life is about — but Alicia’s face remains a mask of passivity throughout, probably because Ruth gets all skittish the one time Alicia admits she wishes she could go back to Georgetown, to seat 35L in Criminal Law 101, and say “yes” to the young man who told her he was in love with her.

Unfortunately for Alicia, a friendly news outlet’s cameras catch her telling Eli about the “nightmare” of being on a bus in the middle of Iowa — a P.R. debacle that’s matched at their next stop when Peter is caught on TV spitting out his umpteenth “loose meat sandwich” of the trail. (Would Peter really be that dumb — or disdainful of his potential constituents — to pull such a stunt? If so, he deserved to lose!) The Florricks somehow overcome it when the caucuses begin — turning the room in Peter’s favor in a swing county. But while they win the battle there, they lose the way overall, running a distant fourth in the state at the close of polls (when they needed to run second to stay viable).

Peter looks shellshocked — he’d believed Ruth’s hype. But Alicia looks deeply uncertain (with maybe a hint of relief) as she strokes his head on the campaign bus.

PRENUP BLUES | As Alicia is out of state, Lucca handles Jackie’s prenup arrangement as she prepares to marry Howard Lyman. Trouble is, Jason uncovers a secret $2 million account of Howard’s — one which he claims to know nothing about. The oversight has Jackie looking for power of attorney — and thinking her new love is suffering from dementia. But in actuality, the account — set up under the dubious name Relic Holdings — was created by David Lee to hide firm money during their exit negotiations with Alicia. It’s barely a stumbling block for Jackie and Howard — sweeter now than I’d ever expected them to be — but I suspect there’ll be delicious hell to pay when Alicia finally delivers comeuppance to her fussy, scheming former coworker.

HOWARD’S END? | Lockhart-Agos-Lee finds itself the subject of an investigation by the Fair Employment Practices Agency — turns out Monica filed a complaint before she got hired — and somehow Diane concludes it’s Cary’s job to apologize. Surprisingly, he acquiesces, but when the pivotal meeting finally happens, Cary admits the firm “fostered a racist culture” — one handed down by Howard. He suggests they invite Mr. Lyman to take emeritus status and have no daily dealings with the firm — and the FEPA rep agrees. But instead of Diane thanking him, she winds up getting outraged. “You used the FEPA complaint to get what you wanted all along!” But wait, wouldn’t Diane — in her infinite wisdom and pragmatism — know that Howard is indeed racist, sexist and a frequent embarrassment? Wouldn’t she be stoked that Cary finally found a way to extract him from the firm’s daily activities? I get she doesn’t want to be double-crossed, but I’m not sure I don’t buy the scene not ending with a Diane-Cary high-five, either. On that note, it’s your turn…

What did you think of this week’s Good Wife? Are you happy or sad about the likely death of Peter’s presidential bid? Hit the comments with your thoughts!