ABC’s primetime lineup is getting some new neighbors this spring, and it seems they are in a very fragile state.

TVLine can exclusively reveal the official poster for The Family, the network’s upcoming drama about the Warren clan and the events that transpire when their presumed-dead son (played by Psych‘s Liam James) suddenly returns years after a disappearance — but is he really who he says he is?

Joan Allen (The Killing) stars as Warren matriarch Claire, whose political aspirations are helped by her family’s tragedy. Rupert Graves (Sherlock), Alison Pill (The Newsroom) and Zach Gilford (Friday Night Lights) round out the cast.

The Family debuts Thursday, March 3, at 9/8c, before moving to its regular time slot on Sundays at 9/8c.

Check out the key art below — in which the Warren clan’s cracks are already beginning to show — then share your early thoughts on the series. 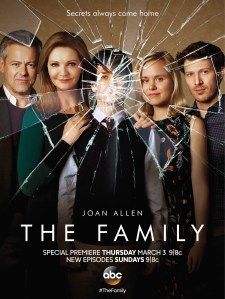