We understand the sentiment, Schmidt, but was Nick really your first choice for best man?

Because, as we see in New Girl‘s Season 5 premiere, the law school dropout/minority bar owner/panic moonwalker is incapable of handling even the most basic head groomsman task without messing it up — and possibly committing a felony in the process.

But Nick’s possibly law-breaking mistake (more on that in a minute) gets lost under the bigger drama: When Jess flies Cece’s mom in for her engagement party, Mrs. Parekh bluntly reveals that her daughter never told her she was getting married — and now that she’s met Schmidt, she doesn’t approve of Cece’s future husband.

Let’s review the ups and downs of “Big Mama P.”

‘THIS IS OUR YEAR’ | While Schmidt proposes best man-hood to Nick (in the bathroom, on one knee, with a ring and everything), Cece offhandedly asks Jess to be her maid of honor. Both roomies happily agree, leading Schmidt to outline his hopes for the nuptials: “Our wedding will borrow equally from the holy trinity of Liz Taylor, Jackie O and the power gays,” he says.

With the ceremony in the future and Winston being celebrated as a “carport hero” for lifting a car off a trapped teen in his driveway, Jess declares that 2016 will be amazing for the loftmates. “This is our year,” she says, repeating it in song. A lot. 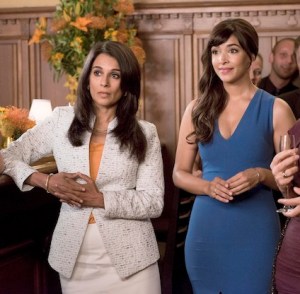 MRS. P DOESN’T LIKE WHAT SHE SEES | Skip to a month later, just before Cece and Schmidt’s engagement party. Knowing that Cece’s mom’s approval means everything to her daughter, Schmidt is worried about the surprise Jess has planned for the party: the aforementioned appearance of his future mother-in-law, about which Cece knows nothing. But Jess assures him that Big Mama P is a romantic at heart; to help soften Mrs, Parekh up, Jess even has hired a local Bollywood dance troupe to perform at the event.

And that’s when everything starts to go wrong. First, Nick accidentally picks up the wrong Indian woman from the airport and drives her to the venue, meaning he has a terrified stranger who doesn’t speak English in his car for a good part of the episode. Then, Jess’ exuberant singing throws her off balance, and she falls down a giant staircase, hurting herself so much she’s bedridden. Worst, though, is when an irked Mrs. Parekh shows up at the party — unaware that Cece is engaged — and instantly decides that Schmidt is the wrong man for her little girl.

“She wanted someone maybe not so… white?” a distraught Cece notes.

ALL’S MEH THAT ENDS MEH | Upon learning of the mess her friends have wrought, Jess borrows a neighbor’s motorized scooter and gets her injured self to the party. She suggests that Schmidt join the dance group’s performance to impress Big Mama P, and though Max Greenfield really gets into it, Cece’s mom is unmoved.

But at least Cece is happy, telling her mom that though she “never thought I’d fall for this slim-hipped ghost of Tom Cruise,” he’s the one she wants to marry. And when Big Mama P walks off without offering her blessing, Nick, Jess and Winston step up and offer theirs. “We’ll get her on board,” Schmidt assures his future missus.

Kind of a womp-womp ending for an episode, no? So let’s go out on a high note by running down Schmidt’s motley crew of groomsmen: Robby (return guest star Nelson Franklin), Big Schmidt (the ubiquitous Rob Riggle), J. Kronkite Valley-Forge (Casual‘s Fred Melamed), Nick, Winston and — of course — Coach. Dare we hope for a Damon Wayans Jr. return sometime this season?

Now it’s your turn. What did you think of the episode? Grade the premiere via the poll below, then hit the comments to expand upon your pick!