Having slowed its roll a bit since the uber-frenetic times of, say, Seasons 2 and 3, ABC’s Scandal wrapped the first half of Season 5 with an impressively buzzy hour in which Olivia’s termination of a pregnancy (that we didn’t even know was in play) was not the only big twist.

No, in addition to that conversation-stirring abortion, Olivia proceeded to break things off with Fitz (and thus end her very brief White House residency), while Jake executed a nagging adversary in cold blood and then reunited with Rowan, the orchestrator of many bad things happening to good-ish people.

Previously, series regular Scott Foley gave TVLine a behind-the-scenes look at the cast’s reaction to the fall finale. Here in Part 2 of our Q&A, he shares his take on Jake’s big kill, the Rowan situation and whether Jake will (or should) welcome another chance at romance with Olivia.

TVLINE | Did you fear that Jake, when all was said and done, would spare Russell, and not kill him?
I did. He had surprisingly let him off earlier this season, and I was worried that… with everything he had done to Jake, from stabbing him to now killing his wife [Elise, played by Mia Maestro], it’s just not in Jake’s character to let him go. I was so satisfied with the result that they ultimately came to. And look, it wasn’t just shooting this guy. He shot him in the face, which is a huge, “You’re not coming back” statement.

TVLINE | Speaking of Elise, what a tease to being on Mia Maestro for just a couple of episodes.
Yeah, she’s really talented. She was great on Alias, and we loved the first season of The Strain…. I don’t know if it played out the way that they wanted it to, ultimately. I don’t know if she was meant to be around longer or not. Stories, like water, have a way of finding their level, and for whatever reason that storyline wasn’t… I don’t want to say it wasn’t compelling, but it worked for the story for her to be offed. It gave Jake a place to go and a reason to sort of search for Rowan again. It’s my opinion that at the beginning of this season, the relationship obviously was Olivia and Fitz, and they were looking for something to do with Jake. And with B613 not being [active], they gave him a wife.

TVLINE | I had faith, though, that they’d find something for Jake.
I’ve learned to always have faith, I know you hear this from all the people in the Shondaland camp, but they do amazing things, man.

TVLINE | They try not to make it seem like they’re servicing a character just to check off a box. They want it to have meaning,
That’s exactly right, A few episodes ago there was an episode where Josh Malina and Portia [de Rossi] weren’t in it, and not because they shouldn’t be but there was so much other story to tell. They’re not worried about servicing characters in order to service characters; it has to be an integral part of the story they’re telling that week, that season. And if for whatever reason it doesn’t fit, you’re not going to be there – and that’s OK. They have their method to the madness.

TVLINE | In Jake’s final scene there, how did that house not blow up after he and Rowan walked inside? I thought for sure it was blowing up!
[Laughs] Yeah, it’s interesting the [camera] angles they chose to take. We did a couple takes where I stopped on the doorstep and sort of looked around as if to say “What am I doing?,” to acknowledge this “What the f–k?” moment. But I think the idea was that Jake had been searching for the source of Lazarus One, and Jake learned that Rowan was not it — and in so he was not all evil. That maybe the man that he knew pre-“the world blowing up,” before all the stuff with Olivia, the man who taught him, was still there. I think that, although Jake is hesitant, we all sort of want a mentor and a father figure, and Rowan has always been that to him. And it’s hard to get away from that. 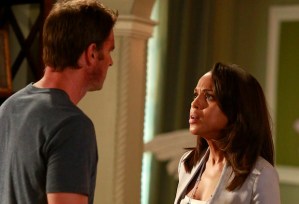 at least heading into that fall finale, how done is Jake with Olivia?
Oh god, dude…. I think because two episodes ago, where Jake found out that Olivia was the one who let Rowan out [of prison]… he had been very patient. He said, “You choose Fitz, you love him,” and she didn’t say, “No, I want to choose you.” He had tried to be the good friend throughout her ridiculous ponderings and questions about “Should I marry Fitz?,” but once he found out that she let Rowan out and Rowan then killed his wife, I think he was done. There were a lot of tweets and social media questions that night about, “Now it’s time for Jake and Olivia to get back together,” “It’s Jake’s turn to stand in the sun with Olivia….”

TVLINE | I’d hate for him to rush into that, though.
Me too, man. I so respect him for saying what he did and telling her that she’s become the woman he father always wanted her to be. I think there’s a large portion of the audience that felt that way and no one had said it to her, so I was so proud of him for basically calling her out on years of s–t. And yes, it took this catalyst of letting her father out of jail, but it was something that needed to be said. So I think that he’s done for now.

TVLINE | Maybe with enough time and space — and some groveling from her — he’ll say OK to coffee.
That’s right. And she buys.

TVLINE | They can maybe then do some proper dating.
That’s what we need to do. “Oh my god — I swipe right and there’s Olivia Pope!”