Will The 100‘s reunion not be a happy one? Why is Castle on the move? Will The Flash meet a female speedster? Who’s new on The Strain? Read on for answers to those questions plus teases from other shows.

The trailer for The 100 looks amazing, but Bellamy and Octavia don’t look too happy with one another. How worried should we be? –Mary Kate
Very. Bellamy will make a decision that will no doubt upset plenty of people. But his sis is particularly angry at him given the relationships she has formed since landing on the ground.

Anything about the Clarke and Lexa reunion on The 100? —Rasha
The much-anticipated moment happens under unexpected circumstances, and Clarke isn’t so happy to see Lexa following last season’s betrayal. But a better question might be: What does the Grounder leader want from Clarke now?

Any new faces coming to either The Strain, Sleepy Hollow, Supernatural or Once Upon a Time? –lilslim
I choose from Column A… and Door No. 4. For Season 3, The Strain is adding the recurring roles of Kroft, a Navy SEAL team leader who finds himself hunting strigoi (and curiously, the actor must be “comfortable with prosthetics”), and Kate Beckett Nelson, an NYPD captain in charge of a squad of combatants. Once Upon a Time meanwhile is casting for Episode 15 the role of Captain Silver, the commanding (and sometimes bullying) boss of a merchant ship.

Got anything on my favorite comedy Fresh Off the Boat? –Lillian
The Huangs aren’t slowing down on holiday celebrations despite already delivering memorable Halloween, Thanksgiving and Christmas installments this season. “We just finished shooting the Chinese New Year episode,” Constance Wu tells TVLine. But, the actress adds, the family’s traditions will face some challenges “in Orlando, Fla., where there’s not much of a Chinese population.”

Who was the singer 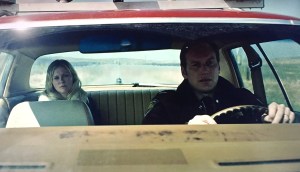 of “California Dreamin'” in the Fargo Season 2 finale? –Dave
That apropos tune — punctuating, as it did, Peggy’s dream of serving her prison term with a lovely San Francisco view! — was a Bobby Womack cover.

While I’m really enjoying the direction the Rosie/Villa relationship is taking on Rosewood, things seem to be moving awfully fast. Can you say how close they will become in the near future/season? —John
“We are definitely moving fast with Rosie and Villa,” EP Todd Harthan acknowledges. “In today’s TV landscape, you can’t slow-burn your stories. We have to keep them intense, juicy and satisfying. So our plan is to keep them in the fast lane but to surprise our audience with the bombs that go off between them both personally and professionally.”

Can you please give us 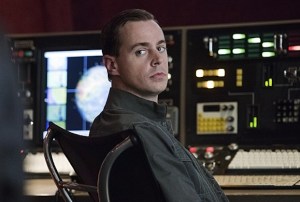 some spoilers on NCIS‘ Tim McGee?!? –Katrin
Lest anything in their romance go smoothly, McGee come February will struggle to figure out what to get Delilah for their first Valentine’s Day living together. Bonus, non-McGee spoiler: Also in the back half of the season, Ducky will have to complete an autopsy remotely when a murder occurs among a group of deep-sea divers who in turn must spend several days in a dive chamber with the deceased :-P

Any scoop on Galavant? I really enjoyed their first season! —Emily
On the good news/bad news front, ABC’s midseason musical-comedy continues to be the most fleeting half-hour of television in all the land. The season opener kicks off in grand fashion with a marvelously meta look at the “new season” facing each character — including Vinnie Jones’ Gareth, who’s unhappy with his lack of a royal title – as well as the modestly rated show itself (cue dig at The Celebrity Apprentice). The return of Once Upon a Time‘s placeholder also features a visit to The Enchanted Forest… and that’s all I will say about that.

How about some non-‘shipper scoop for The Flash? –David
I can report that for Episode 16, the CW hit is guest-casting the DC Comics character of Eliza Harmon, whose TV incarnation is described as an “exceptionally bright scientist” with a “split personality a la Jekyll and Hyde.” In DC lore, Eliza was a Lex Luthor-created speedster, hmm….

Matt, I was wondering if you could give us some more scoop on the “crazy” Flash episodes. –Arena
At the time we spoke to EP Greg Berlanti, he wouldn’t/couldn’t shed much light on the aforementioned Episodes 13/14 — “We haven’t made them yet” — but it sounds as if the cast will have their hands full bringing to life a far-out premise! “I don’t know if they’ll work,” Berlanti admitted. “When we do wacky stuff on that show, I never know if we’ll be able to pull it off. Usually, the actors are the ones who sell it.”

I would love to know if and when DirecTV’s Billie & Billy is coming back. –English
I asked around for you, but there is still no word on the status of Season 2. 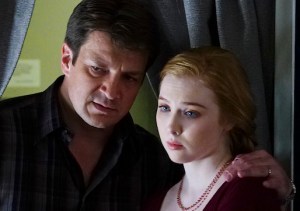 you can tell us about Castle. –Rachael
Episode 14 will send Rick, Alexis and Hayley to Los Angeles to investigate a murder that has ties to an NYPD case. Also in that hour, we discover that a familiar face — though not Kate’s (yet?) — may be linked to Castle’s wedding-day vanishing.

Are there any Reid stories coming up on Criminal Minds? –Deane
As first reported by TVLine, Reid will be back in a big way in the midseason premiere, which is titled “Entropy” and airs Jan. 13. In that episode, the BAU implements an elaborate strategy to try and take down the “Dirty Dozen” hitmen ring, with Reid playing a central role — when he’s not on his “hot” date with Aubrey Plaza, I reckon.

Do you know if Sue will be getting a boyfriend soon on The Middle? Like maybe that Logan guy? –Amy
The answer is “no” and… “in her dreams”? Because at this time there are no plans for Sue to land a fresh fella, seeing as she will continue to crush, hard, on Logan. 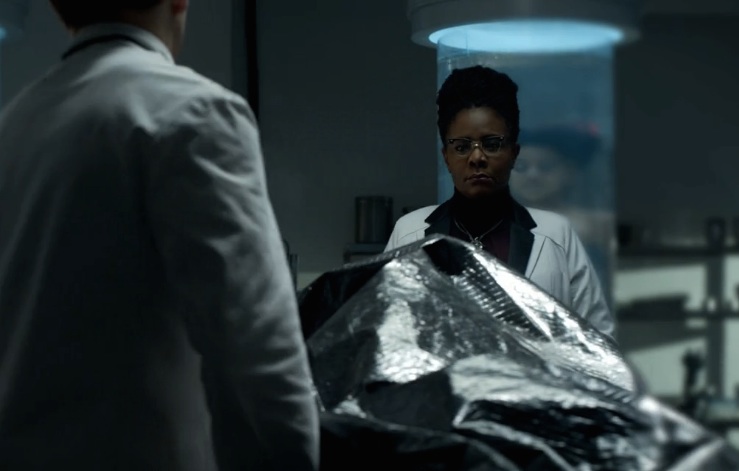 body in one of the Indian Hill containers at the end of the Gotham midseason finale? Because it looked like her from the back of the head. –Joe
It did kind of look like Fish from the back, with the edgy hairstyle and all, but as you can see from this screen grab of the reverse view, that was a younger woman (no offense, Jada!) floating inside the chamber.

Will Person of Interest really have a satisfying ending? The showrunners have made so many promises and many of them turn out to be not true. –Elena
First of all, way to see that glass as half-full, Elena! Secondly, there has been no official word that the truncated Season 5, whenever it arrives, marks the series’ farewell run.”I dont think that’s really up to us,” EP Greg Plageman said when I asked for a status report. “But we have always felt like there was more story to tell” — up to and including a seventh season, he insisted. That said, co-showrunner Jonah Nolan assured, “The way we are crafting the season is that if this is it, if this is the end, I don’t think anyone’s going to leave unsatisfied.”

Real questions, real answers. If you need the Inside Line on a favorite show, email InsideLine@tvline.com!  (With reporting by Vlada Gelman and Rebecca Iannucci)