FX’s Fargo this Monday night put a tidy-ish bow on its stellar second season — no small feat, given that when last we tuned in a bona fide UFO had descended upon the site of an epically bloody melee.

Having yet again dodged death, Peggy and Ed Blumquist (played by Kirsten Dunst and Jesse Plemons) sought safe harbor from Hanzee (Zahn McClarnon) in a supermarket, with Minnesota trooper Lou Solverson (Patrick Wilson) close on their heels. Alas, “The Indian” had put a bullet in Ed during the preceding foot chase, leaving “The Butcher of Luverne” to die a slow death in, fittingly, a meat locker. As Ed began to fade, 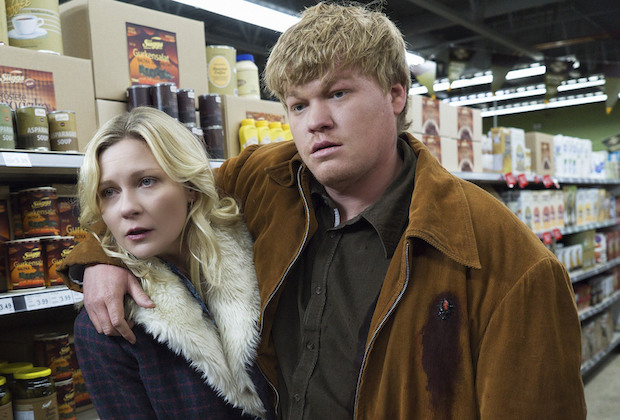 Peggy fretted that their pursuer was aiming to smoke them out by starting a fire outside the door. But when Peggy finally dared to venture out — only to find Lou, and zero flames — we realized that she had imagined the scene right out of the movie she had watched earlier with Dodd Gerhardt (R.I.P.). Hanzee meanwhile has fled, apparently fated to change his face and become this Season 1 character, Alan Sepinwall notes.

Meanwhile, Mike Milligan (Bokeem Woodbine) reported to “Kansas City” after demonstrating an act of kindness (followed by an act of cruelty) at the near-vacant Gerhardt home. The eloquent enforcer’s reward for securing the swath of fresh turf? A 9-to-5 desk job, “optimizing revenue” and charged to possibly one-up the fiscal wizardry of the guy who saved the mailroom a bunch in postage.

As for Lou, he returned home after The Worst Week Ever to reconnect with wife Betsy (Cristin Milioti), who had collapsed from the effects of her trial drug. Earlier in the hour, Betsy related to babysitter Noreen the dream she had of a future with big box stores, along with flash-forwards to daughter Molly’s adult existence. (Cue “Aw, geez” cameos by Allison Tolman, Colin Hanks and Keith Carradine!)

On the heels of nabbing his second career Golden Globe nomination, Patrick Wilson spoke with TVLine about entering Fargo’s eccentric world and surveyed the finale’s series of surprises.

TVLINE | What was your exposure to the Fargo universe going into this?
Huge fan of the film. Borderline obsessed. And while I had not seen the show, I remember that when Billy Bob [Thornton] signed on I thought, “Man, it must be really good.” So I binge-watched the whole season, loved it.

TVLINE | Obviously you wanted to make Lou your own, but did you take any little thing from what Keith Carradine did in Season 1 to give the series a throughline?
You know, outside of a couple things that were scripted, certain physical things that he did, there was more an attitude at play. He’s so confident and stoic and soulful, so it was more about looking at him, the way he affects his daughter, the way he is in several scenes with Malvo…. It’s more about a feeling, not, “I’m going to do his dialect” or “He makes this expression.”

TVLINE | It was more about being true to the character’s value set.
Exactly. And it all comes from the same writer [Noah Hawley], so a lot of that work was done for me. And that freed me up to say, “This is Lou at a very different time of his life.” He’s back from the war and much more eager. I wasn’t really married to, “Do I do the limp?” and all that.

TVLINE | So many Fargo characters have quirks — they’re dim or outright “touched,” they’ll ask you to define sovereignty in the middle of a conversation. Was Lou’s quirk almost that he had none? That he was our baseline…?
He was the baseline, yeah, I think so. It was about watching how every other character responded to him. You can’t have a guy who’s crazy-quirky walk into the Gerhardts’ [for a standoff]. You have to be the stable guy, the rock, and that’s what Lou is. When you’ve got Floyd, when you’ve got Angus [Sampson] chewing on mutton or whatever [as Bear], when Jeff Donovan [as Dodd] rolls in and there are 15 people behind you with automatic weapons — and a cop [Lt. Schmidt] who’s terrified to be there — you go, “OK, I guess I’m the anchor of this thing. Let’s go.”

TVLINE | That standoff actually spoke to an aspect specific to your character, in that we know he lives to see another day. So the drama has to come from, “How?”
Right, right. It’s also, “At what cost?” Going into Season 2, you know he’s going to survive, but you don’t know if Betsy will. The stronger you make that relationship, that really becomes your emotional question mark.

TVLINE | Lou has a line in the finale about the week he’s had. Were you concerned that they would kill off Betsy? Would that have been a bit too much for poor Lou?
I’m glad that they didn’t. I’m paraphrasing what Noah said, but I remember very early on him going, “I’m not interested in seeing her do the typical hospital bed, losing all the weight, dying in your arms…. I don’t want that.” We know that she’s going to die [eventually], we know what those scenes are like, so I like that they didn’t do that.

TVLINE | Lou kind of needs a win, too.
I think you do, right? Yeah, you do. It’s funny, I haven’t seen the finale — can I ask , do you still see me in that flashback with Molly at her graduation? Is that still in there?

TVLINE | Yeah, that was great. And there is the new scene with Allison [Tolman] and Keith [Carradine].
Yes! Which I haven’t seen! That was after I had gone. I’ve met Keith but I’ve never met Allison, so I’m so excited to see that stuff. I’m anxious to see all of that. And that speech at the end, to Peggy in the car, that’s still in there obviously, right? 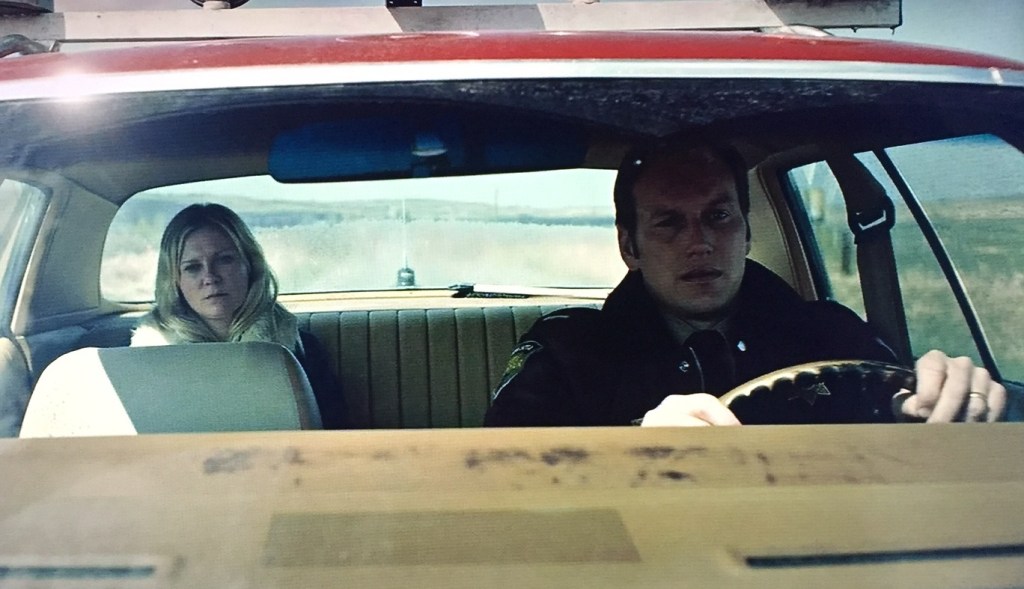 going to say, that’s got to be a meal for an actor, a two-hander like that.
You know, it was. It’s no secret that I love war documentaries, and that’s something about this guy that I really sank my teeth into, what defines him as a cop and as a person. And that scene was loosely based on a true story [about a Chinook helicopter crash] that I had told Noah about. …

TVLINE | What I loved about that story was how it paralleled what they’d all just gone through. Peggy had this “angry helicopter” crashing around her all season, yet she escaped unscathed.
Exactly. That’s what struck me about that story, that that’s how Lou would equate it. So when I read that [in the script], I called Noah and said, “My god, man, thank you for this.” And he was like, “Well, you came up with it! ” [Laughs] But that’s part of what I think is Noah’s mastery, that he’s got the building blocks of what he’s doing for the season, but a lot of the little stories I love just come out of awareness and out of seeing what people have been doing. Even the scene with Nick [Offerman] and the standoff that he’s got [against Bear], I remember being out with them having drinks or something after the first couple episodes, and I was like, “I want to see what happens to Karl Weathers!” And Noah was like, “Well, what are you doing in April? I thought you were busy? “No, I can work it out!” I don’t know how he does that, giving someone an entire arc depending on their availability, but that’s something Noah can just roll with.

TVLINE | Tell me how you first learned about “the UFO of it all.”
I wish there was some crazy story but I remember having to go back and read Episode 1 and thinking, “Did we just start referencing a UFO…?” There was a little something in each of the first few episodes, and I knew it was coming to a head, 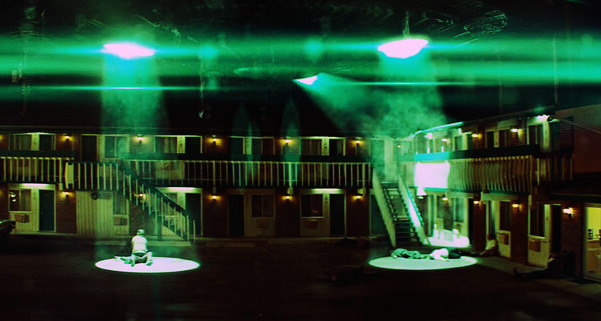 but when I read [Episode] 9 I thought, “Are you kidding me??” But I loved it. Only on Fargo can you get away with that. Of course, people ask me, “What does it mean?” and my response is the same Lou would have: “There was a UFO. I don’t know what else to tell ya!”

TVLINE | Did you, as I did, almost weep for Mike Milligan’s fate, as a sad desk jockey crunching numbers?
Can I tell you how much that made me happy? [Laughs] There’s no weeping involved for Lou! I didn’t want him to die at the end. I wanted him to be resigned to the most mundane, gross job.

TVLINE | Obviously your involvement in this universe is finite. What was your greatest takeaway from the Fargo experience?
I didn’t know how much I would love this character, so my biggest takeaway is how shocking and rare it is to play a guy this strong-willed. I didn’t even realize that as I was going through it, how much of a novelty that was until I sat back and looked at other roles I’ve done. It definitely raises the bar, making me not want to do so many movies nobody sees. TV can do these long-form 10-hour “movies,” and it is very rewarding. It’s unbelievable.

Got questions about Fargo, or for any other show? Email insideline@tvline.com and your question may be answered via Matt’s Inside Line.
If you like TVLine, you'll LOVE our email news alerts! Click here to subscribe.
Loading comments...