This post contains spoilers for Friday’s fall finale of Grimm.

There’s simply no way to talk about what happened in the Grimm fall finale without spoiling that huge moment. So for the sake of those who haven’t watched, just click on “Read More,” and we’ll get into all the Wesen-licious details, OK?

PHEW. That’s much better. As those who watched Friday’s episode know, the final moments of the hour found Nick and friends fighting off an ambush by the Wesen uprising (aka Black Claw). Just when it looked like Nick was done for, a hidden figure worked some mojo that sent his assailant flying. And when that figure stepped into the light, she looked a lot like…

Yep, Bitsie Tulloch is once more a full-fledged Grimm cast member  — only in the brand new role of Eve, a mysterious woman working with Hadrian’s Wall (aka those battling Black Claw) who has all of Juliette’s memories… but none of her emotional attachments. And did we mention she’s a badass?

In separate interviews, Tulloch and series co-creators James Kouf and David Greenwalt give us the exclusive scoop on Portland’s new-yet-familiar face, what Eve’s arrival means for Adalind and what Trubel knew (and when she knew it). Read on for more.

TVLINE | David and Jim, how long have you known you were going to bring Bitsie back?
GREENWALT | A long time… But to keep my word, [Juliette] is dead. She’s coming back, but it’s not really Juliette anymore. It’s this new character, Eve, who has not been brainwashed exactly, but she’s been through some incredibly tough training where they broke her down to nothing. She’s basically a super Hexenbiest weapon for Hadrian’s Wall to fight Black Claw.

She has a big scene with Nick in Episode 7, and she’s just a completely different person who doesn’t even relate to Juliette anymore — because, to her, Juliette’s dead.

TVLINE | Bitsie, was it hard to keep quiet about your new role?
TULLOCH | I’ve been really strategic. I technically was only off for four episodes. It feels like a lot longer, because since the finale I’ve know this was going to happen… Not going to Comic-Con made me a little sad, because I always have so much fun at Comic-Con. But I really needed not to be there to sell this story… Conveniently enough, since David Giuntoli is also my real-life boyfriend, a lot of people just assumed that the reason I was still in Portland was because I’m dating him. The reality is, ‘No, the reason I’m still in Portland is because I’m still a regular on Grimm.”

TVLINE | Has Trubel been in on this? Does she know what’s going on?
GREENWALT | She’s not 100 percent sure exactly what happened, but she knows that the stuff she shot Juliette with was not the killer poison they usually put in those darts.

TVLINE | Eve’s look is rather dramatic.
TULLOCH | When Eve is out on missions, she can’t run into somebody who worked with [Juliette] at the veterinary practice, or a friend, because they all think she’s dead. I started watching Alias over the summer, because I was like, ‘All right, she’s got to be incognito.'”… That’s been really fun — skintight leather and these awesome wigs that she wears whenever she’s out. There’s also a really great new location that fans are going to get introduced to in Episode 7 or 8. 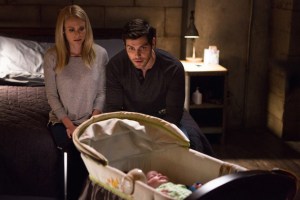 TVLINE | I was surprised that Nick and Adalind hadn’t gotten closer by now. When we heard that Bitsie was coming back, I assumed it would be as Nick and Adalind got really close.
GREENWALT | [The Nick-Adalind relationship] is going to have a life of its own with out the Juliette/Eve [aspect], because they have a kid.
KOUF | But there’s a lot of other complicated things that are going on that will determine how that relationship works out.

TVLINE | What’s it like when Nick finds out what’s going on?
TULLOCH | Obviously, Nick has a wild reaction. Monroe’s is different from the Captain’s… I can’t give anything else away. The fun in her character is everyone interacting with her.

TVLINE | How much will we see Eve, moving forward?
GREENWALT | You’ll see her in every episode, doing something.
KOUF | But not necessarily as part of the gang.

Were you surprised to see Tulloch back on Grimm? Take the poll below, then hit the comments with your thoughts on the episode!