After seven seasons of brawls and bro-outs, The League on Wednesday (FXX, 10/9c) will finally head into the end zone. (That was supposed to be a football reference. Did I do it right?)

“We wanted to make sure that it felt like any other episode of The League,” series creator Jeff Schaffer tells TVLine of the finale. “We didn’t want it to be some sentimental goodbye. It’s a whole bunch of stories that come together unexpectedly, and it’s funny. At the end, we want people to say, ‘I can’t wait to see what happens,’ or, ‘I have to see another one.’ The only difference is, this time, there isn’t another one.”

That said, Wednesday’s episode — the series’ 84th overall — does strive to tie up quite a few loose ends, in addition to crowning the ultimate Shiva and Sacko champions. Here’s a taste of what you can expect from the finale:

* The return of Janina Gavankar’s character, without whom the show would look — or at least sound — very different. Explains Schaffer, “We couldn’t do the final quest for the Shiva without actually having Shiva.”

* The Oracle (Paulie Litt) also returns for the first time since the series’ 2009 pilot “to tell everyone what’s in store for their futures.”

* The Pete-Meegan-Andre situation will be resolved in the finale. “There are stories that we would only do if it was the final season,” Schaffer explains, citing Meegan’s return (and pregnancy!) among them.

* Additionally, Kevin and Jenny will finally decide who’s going to get a vasectomy and who’s going to get their tubes tied. “A new trophy will be introduced at the beginning of the episode,” Schaffer teases. “It’s a giant, gilded pair of scissors called the Snip.”

* Lastly, Schaffer teases “the coolest guest star we’ve ever had on the show,” which — as it turns out — is probably Larry David. “We’ve wanted him for a long time, and we finally found the perfect role.”

As a bonus, the network also gave the show a full 30 minutes to wrap things up, as opposed to the usual 22. And you know what they say about giving someone an inch…

“We shot an hour,” Schaffer admits. “There are amazing scenes and guest stars you won’t see when it airs on Wednesday, but we will put out a full hour-long version of it at some point.”

What are your hopes for The League‘s series finale? Drop ’em in a comment below. 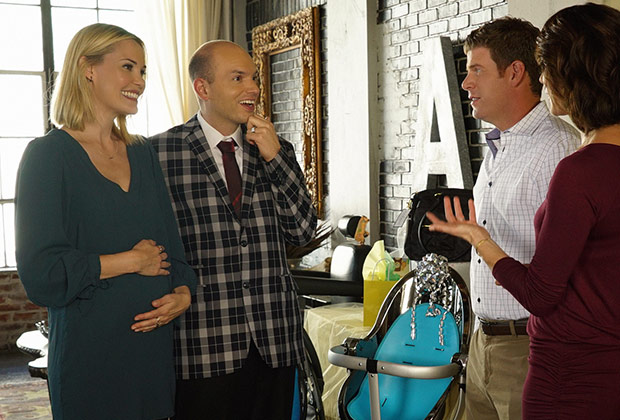