Is Dorothy Gale trading in her gingham dress for a warrior’s wardrobe?

TVLine has learned exclusively that ABC’s Once Upon a Time is plotting to revisit the plucky lass, who previously was seen in the Season 3 episode “Kansas” (then played by Matreya Scarrwener, now age 17 and co-starring on UP’s Ties That Bind). 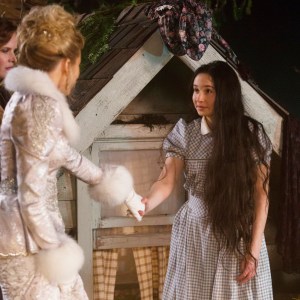 Thing is, when next we encounter Dorothy (midway through Season 5B), she will be in her late 20s to early 30s and will have evolved from “the iconic, pig-tailed girl from Kansas” into “a brave warrior for good.” Having been sent home to the heartland with three clicks of her heels — courtesy of the “Wizard” (aka a duplicitous Zelena) — Dorothy returns to Oz looking to reclaim the magical land from the Wicked Witch, whom Regina just ejected from Storybrooke.

Who would you cast in the recurring guest star role?