Rocked by the tragic murder of his girlfriend and in turn determined to “end” HYDRA honcho Grant Ward’s treachery, Marvel’s Agents of S.H.I.E.L.D.‘s Phil Coulson took a big leap — literally — and landed all the way on another planet.

Though he took some knocks upon hitting the extraterrestrial terrain, Coulson’s arrival on the planet sets the stage for a S.H.I.E.L.D. showdown long in the making, as Coulson hunts down Ward, his onetime colleague, who traveled through the portal with Fitz in tow to retrieve a mighty Inhuman warrior.

TVLine spoke with Clark Gregg about, no, not Coulson’s impressive aim during a free-fall, but the out-of-this-world conflict to come in the ABC series’ midseason finale (airing Tuesday at 9/8c).

TVLINE | Phil was running pretty hot there at the end of the last episode. What’s going through his mind as he’s parachuting down into that five-foot wide portal?
At that point, I still think his No. 1 mission is to try to end the Ward problem once and for all — but by then, he’s also got the complication that Fitz and Simmons have been kidnapped and that Fitz seems to have been taken with Ward through the portal. So, he’s on a recovery and a search-and-destroy mission at the same time.

TVLINE | All things being relative, Coulson has been one of the more even-keeled team members. What do you think ultimately moved him to say, “I’m going to end this”? 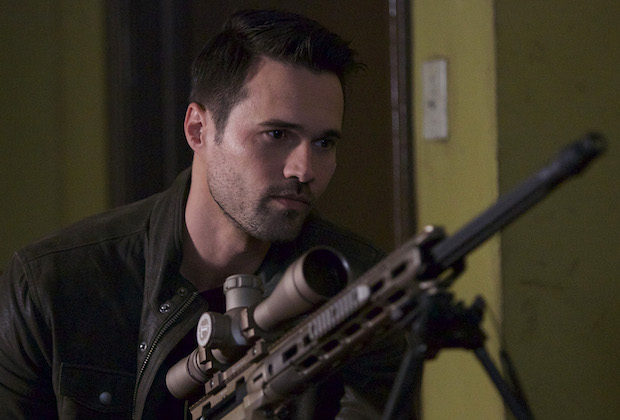 Well, with the stuff that Ward’s done, the people he’s killed, it’s certainly reached this kind of critical mass. I also think that [Coulson] is a guy who’s had to put a lot of normal things that most of us can depend on — like intimacy, friendship — on ice for the job, and then he finally meets somebody he connects with, and he’s able to trust her, and he finally opens up and makes a connection… and then Ward murders her in cold blood, in front of him, from a cowardly distance. I think that something snaps.

TVLINE | Phil’s previous relationship ended in its own tragic way, not being able to be with Audrey, and someone on a superhero series last season said, “Guys like us, we don’t get the girl.” Do you think that applies to the director of S.H.I.E.L.D., as well?
Wow. That’s such a dark, sad [sentiment]. Certainly, it feels that way. There’s loneliness to leadership. There’s loneliness to covert operations within S.H.I.E.L.D.. That said, I never want to rule anything out. I think that in a way that puts a finger on what our show is about — I would hate this job if you aren’t still a human with real feelings, and compassion, and love, but how can you have those things when the job is your priority? It’s a paradox.

TVLINE | What do you think the lasting effect of his short-but-sweet romance with Rosalind will be?
I think that will be a question that is both raised and answered, and perhaps reopened, at the end of the midseason finale.

TVLINE | You had a great scene partner there in Constance Zimmer, for however long it lasted.
Oh, yeah. She’s amazing. She’s now someone I consider a good friend, and someone who I’d worked with once or twice before and always liked immensely. It was a very sad day for me when her character was knocked off, because again, I like her so much and I like what she brought to the show. I like the foil that she was, kind of the flip side of the coin to Coulson.

TVLINE | Plus, as an actor, it gives you these new colors to play. You get to have that snappy banter, be the wine-pouring romantic — at least for a few episodes.
Yeah. Exactly. It’s just kind of opens up more chambers of this guy.

TVLINE | Now, a lot of characters walk around saying, “Grant Ward must die.” When push comes to shove, do you think Coulson has it in him to end Ward? And if not, what might give him pause?
It’s funny, I think Coulson really tries hard not to cross the line that would make him a little too similar to the people he’s trying to stop as head of S.H.I.E.L.D., and he’s walked that line carefully. But what became clear in [Episode] 309 is the body count, the injury count, that has added up since he put Ward on his team, and since the emergence of HYDRA. It is really weighing heavily on him, and it’s what I like about what the writers have done here with the midseason finale. They’ve forced Coulson into a place where he has to cross a line I don’t think he’s ever crossed before.

TVLINE | Before Coulson left for this mission, he appointed an interim director. How’s that going to work out for Mack? Any tough calls for him to make?
Yeah, I think he threw Mack a curve ball. 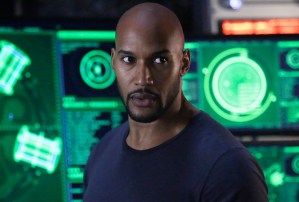 [Laughs] Mack never really seems to want to do the things Coulson’s asks him to do, and he didn’t seem too thrilled about being the director….

TVLINE | That scene was very funny.
I love the fact that that’s the call Coulson makes, but there’s certainly legitimate reasons why May is still too biased when it comes to Ward, both because of their past and because of Andrew. And I just love that the guy who seems to have the most problems with Coulson, in general, is the guy Coulson puts in charge. We’re going to see, even more, what a great call that was by Coulson in what happens in the midseason finale.

TVLINE | Before we go, what might people be surprised to know about shooting the planet scenes? I don’t know where you film them, but is it cold? Is it hot? Is it unpleasant in other ways?
I think people who’ve never spent time in Los Angeles would be surprised to know that from a 5 am arrival to a 6 or 7 pm departure, the temperature changes, during one day, from 34 degrees to the mid-80s.

TVLINE | Holy smokes.
I mean, it’s the desert. It’s really cold for part of the day, and then it gets really warm, and then it gets hot, and then it gets cold again. Meanwhile, the dust storms are created by these giant kind of airplane propellers…. Four to five days later, we’re still trying to get sand, dust and alien particles out of our systems!