Amid the Hawk-this and Hawk-that of its second annual crossover with The Flash, The CW’s Arrow drummed up more down-to-earth drama by exploding the nascent romance between Oliver and Felicity.

For a short while, at least.

But when things got gnarly on a much larger scale — as Vandal Savage bested Arrow, The Flash, Hawkman and Hawkgirl and then obliterated Central City as a whole — the scarlet speedster’s flight from the fracas thrust Barry backward in time, to hours earlier.

That “second chance” afforded Teams Arrow and Flash the opportunity to outwit Savage in Round 2, as well as undid the Oliver/Felicity break-up. Or at least put it on hold, seeing as Oliver “again” is keeping the truth about William, his son via onetime fling Samantha, under wraps, if only so that he can discreetly bond with his boy.

I have four older sisters, and thus grew up watching soap operas after school (in part because back then, your typical family had only one TV set!). And I have covered soaps in-depth… for Soaps In Depth. So I can appreciate the power of a paternity twist, the narrative punch that a secret child can deliver. But Arrow, to spin its version of such a tale, simply asked viewers to swallow too, too many whoppers.

Here is the considerable sequence of improbable events that needed to fall in line perfectly during Part 2 of the crossover in order to fuel the furious fight between Oliver and Felicity:

1 | OLIVER SPOTS SAMANTHA AGAIN
“Really?” Factor: 1 (out of 10). She lives in Central City and obviously likes her Jitters java. No foul.

2 | OLIVER KEEPS MUM ON THE POSSIBLE BABY MAMA
“Really?” Factor: 3. Oliver notes that Samantha’s son is about the right age to be his own, but doesn’t share that “Hmm…” moment with Felicity — nor need he at such an early stage, having zero proof.

3 | OLIVER GETS HIS HANDS ON WILLIAM’S DNA
“Really?” Factor: 6. Tracking down and confronting Samantha at her home, a happenstance dropping of the moppet’s hat gives Ollie the chance to pinch a piece of hair for testing. If there was no hat in play, what was Oliver’s next move?

4 | OLIVER TASKS BARRY WITH RUNNING THE DNA TEST
“Really?” Factor: 7. The instant Oliver had the hair, I asked myself: But who will he have run a DNA test? Surely not Felicity. Instead, he entrusts it to perhaps the next-closest person to Felicity, rather than go to a well-removed third-party lab.

5 | OLIVER DOESN’T TAKE THE RESULTS WITH HIM
“Really?” Factor: 7. Bring them with to show Samantha? Nah! Leave them with Barry, to possibly be discovered by someone? Sure! 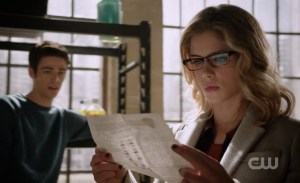 Yes, Felicity would care about what’s bothering her beau. But were we to infer she was tailing him? (She enters the CCPD lab declaring, “I’d like to know what’s going on here.”) And then leaning on good-natured Barry to betray a confidence? No.

7 | BARRY ALL BUT HANDS FELICITY THE CONFIDENTIAL DNA TEST RESULTS
“Really?” Factor: 9. Not only is The Fastest Man on Earth not quick enough to stealthily stash the paper, Barry proves to be the worst liar when failing to explain it away. (At that point, he caves and actually hands Felicity the results.)

8 | BUSTED, SAMANTHA NEGOTIATES THE STRANGEST CUSTODY DEAL EVER
“Really?” Factor: 10. Confronted with her cover-up, Samantha tells Oliver that he can bond with his boy — if he tells not one other person on this planet (or on Earth-Two, she would probably add, if she knew of Earth-Two) about his kid. He cannot even confide in the love of his life, because… well, we’re still fuzzy on Sam’s reasoning. Reallllly fuzzy.

9 | OLIVER SERIOUSLY CONSIDERS AGREEING TO THE TERMS!
“Really?” Factor: 9. I’m a dad, so I can understand the want to know your offspring. Totally. But a man who cheats death on a daily basis and has gone up against all manner of brutal foe would have stood his ground and held out for a sweeter (meaning: reasonable!) deal. Especially if said man had recently signed off on a “No secrets” policy with his girlfriend. (And again, Oliver the “second” time around does take Samantha’s silly deal.)

10 | FELICITY DOESN’T HEAR OLIVER OUT, FIGHTS THE WRONG FIGHT
“Really? Factor: Can we go to 11? As The Fight gets underway, Oliver at one point says all that he really should need to say — he simply needed a bit of time to process this baby bombshell. But rather then allow Felicity to appreciate that need, she instead dwells on “trust” issues, when a lack of trust in no way figured into this equation or his decision. (I did in fact yell at my TV, “It’s not about trust!”)

In the end, we got a fight that was more livid than it had any right being (given Oliver’s need to process the discovery and at least attempt to abide by Samantha’s wackadoodle terms) and one that cast Felicity, who is unarguably an extremely reasonable person, in an out-of-character light. Yes, it all got undone in the next act of the episode, except now Oliver is poised to sit on the truth for an even longer stretch of time.

Hopefully, cooler heads will prevail the next time Oliver and Felicity work through the news about his son…?

What did you think of the the Arrow fight and how it incredibly came about? 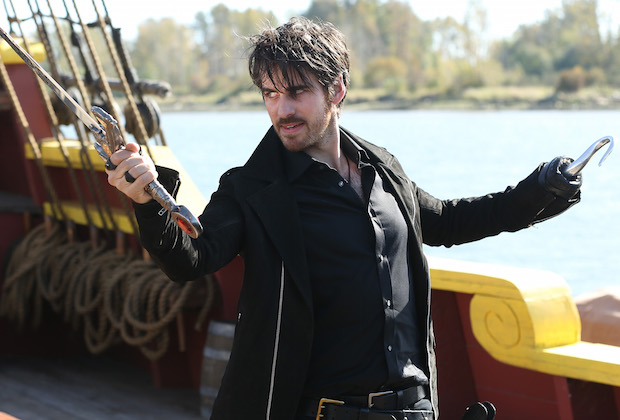