Warning: The following contains spoilers for Tuesday’s episode of The Flash.

With The Flash (meaning: Barry) not quite up to speed, the first half of the CW hit’s annual crossover with Arrow turned to comic book lore for help on Tuesday night.

To briefly recap of the spinoff-launching special event:

Barry and Cisco whisked Kendra Saunders off to Star City to protect her from Vandal Savage, but the immortal baddie wasn’t the only one looking for the barista. Her similarly re-re-re-reincarnated lover Carter Hall, aka Prince Khufu to her Priestess Shiera, flew in and literally snatched her up before being taken down by Barry and Oliver. Over the past 4,000 years, Carter eventually revealed, Vandal killed him and his soulmate 206 times, growing more powerful with each of their deaths.

To help push Kendra over the edge into acceptance, Carter shoved her off a roof so that she would take flight and emerge as Hawkgirl. However, it was a talk with Cisco — who was definitely the episode’s MVP for one-liners — that actually did the trick and got the young woman to embrace her destiny. The bad news? Savage got his hands on and made off with The Staff of Horus, an ancient weapon located in Central City. Afterwards, Oliver spotted his former fling with a young, superhero-worshipping boy who just may be his son. (More on that whammy coming Wednesday night!)

There was also plenty of action back at S.T.A.R. Labs as Caitlin and Harry collaborated to create a serum – one that might sound very familiar to Flash readers! – to help Barry run faster and thus have a better chance of defeating Zoom.

“If you’re a fan of the comics, you know that a big part of the comics is Velocity 9,” which was developed by Savage in canon, executive producer Andrew Kreisberg says. Seeing as how the scientists dubbed their concoction Velocity 6, “It’s safe to say that there’ll be a few more iterations of that formula. How it plays out and how it works and who uses it and the effects, that’s something that you’ll have to watch” to discover.

For now, we know that guinea pig Jay Garrick — who briefly used the serum so he could phase through Wells and remove the bullet Patty put in him (!) — is not a fan of the drug, strongly warning the docs to keep it away from Barry.

“He’s not jonesing for a fix or anything,” his portrayer Teddy Sears shares. “But he’s aware of the potential Velocity 6 has on his life. I also think he’s clear that ‘I don’t want to go down that path.’ But like anyone who has seen the other side, there are haunting memories of what could be and what could have been.” 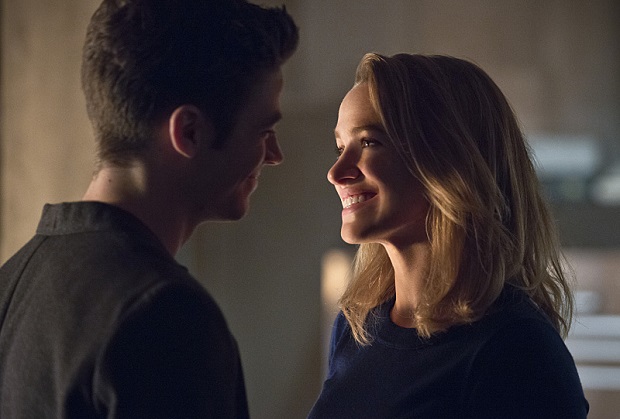 Meanwhile, Patty got dangerously close to the truth about her boyfriend’s double life after coming face-to-face with Wells-Two, before Joe raced to the scene to abruptly intervene. That close call will leave Barry to wonder, “‘Can he actually have a relationship with somebody, and what does having a relationship with somebody mean?'” Kreisberg previews. A shame, since Oliver just clued him in to the fact that the hero can get the girl!

Coming off her own season of being kept in the dark, Iris will have the following advice for her pal: “‘I’m telling you, as your friend, that the way you handled things last year was terrible, and you caused a lot of unnecessary hurt,'” Kreisberg previews. “‘You have to do things differently if you really care about this girl.’ Then on the other hand, [Barry] has this new version of Wells, ironically, telling him, ‘If you really care about this person, you keep her as far away from all of this as possible, because if Zoom finds out, he’ll kill her.’ So Barry is really wrestling with those two things moving forward.”

But being the clever and curious cop that she is, Patty “doesn’t need any help getting herself into trouble,” the EP continues. “Patty loves the metahumans, and she loves the danger. She loves the science of it all, so in some ways, she’s being presented as the perfect girl for Barry Allen. So what’s it going to take for him to let her in?”

What did you think of the first half of the Flash/Arrow crossover? Grade it via the poll below, then hit the comments to back up your pick!