It’s a rare condition, this day and age, to read any news about the cast of Family Matters reuniting — so let’s all thank Lifetime for making that rarity a reality.

Reginald VelJohnson and Jo Marie Payton, who played Carl and Harriette Winslow on the ABC/CBS sitcom from 1989 to 1998, will once again share the small screen in The Flight Before Christmas, premiering Saturday at 8/7c. 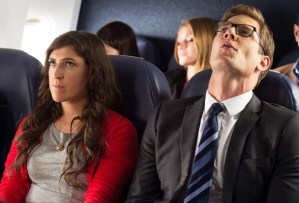 Sure, the movie technically stars Mayim Bialik (The Big Bang Theory) and Ryan McPartlin (Chuck) as a pair of harrowed holiday travelers, but we all know you’re really going to tune in for a taste of that unmistakable Winslow chemistry.

Though both actors worked steadily after wrapping Family Matters — VelJohnson recurred on a number of series, including Mike & Molly and Hart of Dixie, while Payton held down a series regular role on Disney Channel’s The Proud Family — this marks their first on-camera reunion since the role of Harriette was taken over by another actress in the show’s final season. (Yes, that really happened.)

Does seeing this timeless couple back together bring back any old emotions? Drop a comment with your thoughts on their reunion below.