Berlantiverse favorite Tom Amandes is heading to Arrow — to do a real “number” on someone.

TVLine has learned exclusively that the alum of such past Greg Berlanti projects as Everwood, Eli Stone and No Ordinary Family has booked an arc on 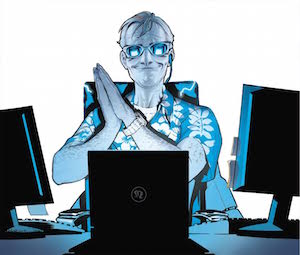 (one of!) the prolific producer’s CW series as DC Comics villain The Calculator.

A criminal mastermind and technical genius, The Calculator — aka Noah Kuttler — uses his advanced skills in computer science and internet manipulation to blackmail Roy (Colton Haynes) out of retirement to do his bidding, which leads to an epic battle with Team Arrow.

Amandes — whose most recent TV credits include Chicago Fire, Revenge, Parenthood and Scandal — is set to appear in two episodes, beginning with this season’s 12th outing, “Unchained.”

Arrow resumes Season 4 on Wednesday, Dec. 2, when it presents the back half of this season’s #Flarrow crossover event.