As a gay, forty-something white man and father of 4-year-old twins, I have no business judging the rap battle that took place on this week’s episode of Empire (though for the record, I’d probably call it a draw). That said, I do know a full plate of crazy when it drives up to the curb in a black SUV, sporting a chauffeur’s cap and a $10 blonde wig from Party City.

So you’ll have to forgive me if I hijack one of Cookie Lyon’s great Season 1 lines and apply it to our old friend Boo Boo Kitty: “All right, look, girl — I don’t judge. But you’s a freak — and that’s a good thing. We can sell that.” In other words, welcome back to the plot, Fake-Ass Lena Horne — we’ve missed you! 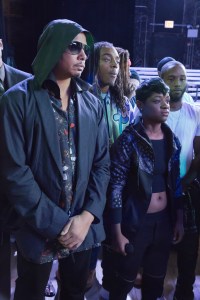 This plot twist spins me right round (baby right round), like the record player in Dead or Alive’s greatest hit — or for you young’uns, like Flo Rida and Ke$ha’s heads in their seminal 2009 collaboration “Right Round.” I mean, we knew Anika was a little touched based on her plans for a white-doves and catered-canapés wedding with Lucious Lyon, but seeing her tear open a pregnancy kit with a hunting knife, then impersonate a limo driver and (likely) kidnap Laura? Well, now I know how Bugs Bunny felt when he learned Baby Finster was a bank robber.

But “My Bad Parts” is more than the sum of Anika’s bad acts: There’s Cookie hiding in a closet and eating a soft taco! There’s Jamal’s greatest hit since “You’re So Beautiful”! There’s major product placement for Pepsi! So let’s cut to the recap: 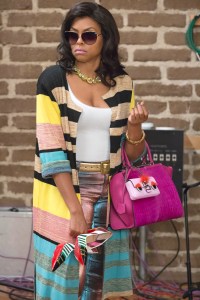 GETCHA PEPSI ON | Jamal is caught in a love triangle — a parental love triangle to be specific. He’s in the running to be Pepsi’s next spokesperson — provided he can come up with the perfect song. Problem is, Cookie gives him delicate strings and piano, and he loves it. And then Lucious delivers him tribal beats and blazing guitars, and Jamal loves them, too. And because of his parents’ seething feud, he can’t admit to either one that he’s two-timing. It all blows up when he gets them in the same room and tries to make the music bring ’em together — “This is not the Disney Channel!” shouts Cookie — and it turns out that little brother Hakeem holds the solution. “They’re business partners — not your parents,” Hakeem says, encouraging Jamal to be the boss and take what he needs from each. The end result, a thrilling dance track called “Ready to Go,” keeps both Lyon patriarch and matriarch glued to their seats, seals the deal with the soft-drink giant and results in as close to a group hug as these people are ever going to get. Oh, and just in case there was any question, both Cookie and Lucious will be producing Jamal’s record — and that’s an order from Jamal himself. Lest we forget, he’s not afraid to dangle a bitch over a balcony, mmmkay? Recognize! 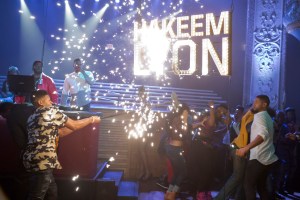 HE DON’T EVEN KNOW HIS LAST NAAAAME (HIS MAMA REMAINS UNASHAMED) | Becky warns him he’s going too far — oh, Becky, we need more of your wisdom in the Empire universe! — but Lucious goes ahead and cosigns Freda Gathers’ performance of a new dis track that paints Hakeem as “daddy’s little girl.” We interrupt Hakeem’s (possible) taking of Laura’s virginity with a video of raging Freda — and let’s just say Hakeem doesn’t back down. Instead, he challenges the female upstart to a rap battle — with the prize being his Lyon surname. (Little does he know, Cookie and Lucious have a side bet — if Hakeem wins, Lyon Dynasty gets to release Jamal’s next record; if Freda wins, Empire scores Hakeem’s next release. But…ummmm…isn’t Empire a publicly traded company? Oh who cares?) There are dozens of great zingers thrown back and forth — “Tell Cookie get the milk, her baby keep on cryin'” spits Freda, and even Cookie has to nod her head with mad respect — while Hakeem declares that, “like Warren Buffet, I own stock!” Hakeem really gets the crowd involved, though (good advice, Jamal!) as opposed to Freda’s more internal style, and he takes the prize, then smashes the illuminated “Lyon” beneath the word Hakeem. Yep, from now on, he’ll be uni-monikered — with no artistic ties to daddy. Lucious promptly has a flashback to being a homeless pre-teen, waking up beneath a stone lion and clearly getting the inspiration for his name. Turns out, Hakeem’s rebuke stings more than he’ll ever let on — but he can’t say Becky didn’t warn him! 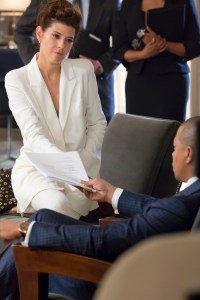 LIVIN LA MIMI LOCA | Mimi is all “Come with somethin’ betta or let’s close this!” regarding the SwiftStream deal, and I involuntarily shout at my TV, “Girl, you white!” (Oh, c’mon, you thought it, too.) Thirsty and Andre fail to dig up dirt on the streaming service’s CEO — which leads to a final negotiation where Lucious sucks on a lollipop (random!) and Mimi comes in at the last minute, signs the paperwork and then dramatically shares, “I have to get to Positano!” I don’t care how many more billions she has in the bank, I wouldn’t co-sign a Dunkin Donuts drive-thru purchase with her at this point. (We can all agree Mimi’s been a letdown since her bad-ass intro in the Season 2 premiere, yes?)

IT’S ALSO IMPORTANT TO KNOW | Laz gets sidelined this week (by which I mean to say he does not take off his shirt). But when he and Hakeem get into a shoving match at Lyon Dynasty, Cookie slaps him so hard you can feel the whoosh in your living room. “Don’t ever touch my son!” #BowDown 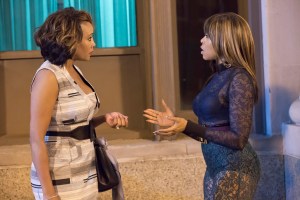 YOU DIDN’T REALLY THINK HER MAMA NAMED HER COOKIE, DID YOU? | As Cookie celebrates Hakeem’s battle victory with all three sons — and braces for Lucious to do something dreadful — her reverie is interrupted by an angry, silk-pantsuit-wearing woman (Vivica A. Fox, playing Cookie’s sister Candace). Except Candace keeps referring to Cookie as… drumroll please… Loretha! (¡¡¡!!!) She’s rolled in from Cherry Hill, NJ, with her slick mouth and unabashed judgment to tell Cookie that their sister Carol has gone on such a bad bender that she’s abandoned her kids to Candace and her wealthy white husband. Rich? Hrmm. “I can’t tell by them cheap-ass shoes,” huffs Cookie, making me really hungry for a full-blown Empire Thanksgiving. We’ll settle for a road trip to Philly though. I wonder what car snacks Cookie fancies! 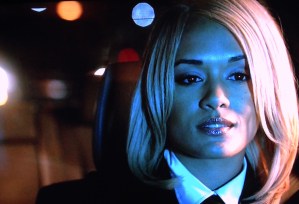 SHE GOT THAT BOO BOO… POW! | Anika discovers she’s pregnant, and after a run-in with Rhonda, learns babies are kryptonite for Lucious. She tries to get back with Hakeem, but he tells her he’s fallen in love with Laura, puts Anika in the friend zone — then tells his one-time lover they’re “still homies.” I suspect this hits Anika harder than Cookie’s knuckles in the Season 1 finale, because as the episode ends and Hakeem puts Laura in an SUV, we get an SVU twist. A blonde-wigged Anika is behind the wheel. Oh hold on, Laura, it’s gonna be a bumpy ride!

What did you think of this week’s Empire? Could you have ever predicted Anika’s 50 shades of cray? Sound off below!