Between her husband Jackson, her baby daddy Klaus and her [insert complicated adjective here] Elijah, The Originals‘ Hayley Marshall-Kenner is up to her claws in dude drama.

And while we’re eager to see how Phoebe Tonkin‘s character handles the boys of the Big Easy, we first have to discuss Hayley’s brutal battle with Klaus in “You Hung the Moon,” which earned Tonkin a spot as TVLine’s Performer of the Week.

“That and the scene where I gave birth in the finale of Season 1 were probably the two hardest days I’ve ever had on set,” Tonkin tells TVLine. “When you watch those scenes, they only run for about five or six minutes, but they each took, like, 14 hours to film. It was exhausting.”

Below, Tonkin offers up more details from the big fight, previews a new enemy on the horizon and discusses the importance of The Originals‘ female friendships.

TVLINE | So, 14 hours, huh? That’s a lot of screaming.
[Laughs] Yeah, you just kind of do as much as you can. Joe was great to work with, but we also had little baby Hope who was just not cooperating. You’re doing all this tough, emotional work, and then you’re like, “No, Hope, get away from the balcony!” or “Get away from the stairs!” It was a whole other thing, so that would take me out of [the scene] and I’d have to find a way back in. That was probably the most challenging part.

TVLINE | I’m really enjoying Hayley and Davina’s friendship this season.
I think it’s nice, too. Hayley went through a lot of the show without having any real friends. She was always there to support Klaus or Elijah, and it’s important to show that kind of female friendship. I’m glad that they’re utilizing that. The girls all have such good chemistry with one another, and it’s an ensemble show, so it’s important to show the females fighting together for what they want. 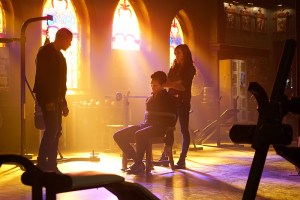 TVLINE | Speaking of fighting, who do Hayley and Marcel have tied up in the photos from Thursday’s episode?
Ah, yes. That’s someone I can’t elaborate too much about, but he’s someone who’s not on the Mikaelsons’ side. He’s a potential threat to Hayley and Marcel, so they team up a little bit to show him what’s right and what’s wrong.

TVLINE | During a recent Q&A, Michael Narducci mentioned Hayley having to make a big decision about her allegiances. What’s going on in Hayley’s head right now?
I think Hayley’s just trying to do what she’s always done, which is to protect her child. She’s trying to keep the city safe enough for her daughter to have a normal life, and she’s working on her relationship with Jackson. There’s been a lot of pressure on [their marriage] recently, because she’s been having to spend a lot of time with Elijah, and Jackson knows she has a history with him. So she’s pretty preoccupied with maintaining a healthy marriage and looking after Hope.

TVLINE | Do you think Klaus and Hayley will ever be able to sit down and have a civil conversation?
Klaus and Hayley don’t really have a lot of scenes together, especially by themselves, but I’m really hoping they do [in the future], because there are a lot of issues that have been swept under the rug that need to be addressed. They have a kid together, and they have all this history — I don’t think it’s as simple as it looks on screen. Klaus has done some really awful things to Hayley and she shouldn’t forgive him easily.

TVLINE | Last week’s episode was an interesting change of pace, with everyone slipping into formal wear. Do you prefer those classier party episodes or the bloody fights?
[Laughs] I’m quite lucky, I get to wear my favorite pair of jeans and a henley every episode. It’s so comfortable. It’s also fun to get dressed up, but in three seasons, I don’t think I’ve ever worn high heels. Even in a ball gown, or a wedding dress, I’m in flats. I manage to escape the heels, so I feel like I got really lucky.

Your thoughts on Hayley’s past, present and future? Drop ’em in a comment below.