Sources confirm that the current Good Wife actor is joining The Walking Dead as one of the Biggest Bads of ’em all — dreaded comic book villain Negan.

Morgan’s killer of men is expected to debut toward the end of the AMC hit’s current sixth season (in other words, sometime this spring), and then return in Season 7 as a (likely) series regular. 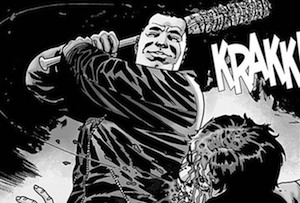 Morgan’s new gig isn’t expected to have an immediate impact on his Good Wife duties since Walking Dead‘s annual production hiatus begins in late November and continues until late spring. That said, it seems unlikely that he would be able to bring his investigator character Jason back to the Good Wife next fall for a potential eighth season. (As it is, Morgan’s Good Wife deal was always just for the current Season 7).

Rumors about if and when The Walking Dead would introduce Negan have been churning for several years now. A big reason the character has been the source of so much speculation is because [SPOILER ALERT] in Robert Kirkman TWD comic series he eventually murders Glenn. Of course, the current mystery surrounding Glenn’s fate (and Steven Yeun future with the series) adds a whole new wrinkle to the Negan storyline.

Last month, The Walking Dead issued a casting notice for the role of “Orin,” an imposing, charismatic, brutal, frightening, ferocious and hilarious sociopath in his 30s to mid-40s that is both a leader (and killer) of men. When asked if “Orin” is actually “Negan,” showrunner Scott M. Gimple told me, “I can neither confirm nor deny,” before cheekily adding, “It’s not the worst guess in the world. It’s difficult to get around your logic here.”

Thoughts on the casting? Weird to think of JDM playing someone so… evil? Weigh in below!