This Wednesday on The CW’s Arrow, Oliver stumbled upon — and was incensed by — the truth about Laurel and Thea’s “spa weekend,” then called in a favor from the mystical John Constantine (played by Matt Ryan, star of NBC’s short-lived series).

Elsewhere: In helping Lance with one of his Darhk deeds, Diggle ultimately discovered a disheartening truth (or “truth”?) about his brother Andy, while Curtis deciphered Ray’s “farewell” message for Felicity — in which Palmer revealed that he was alive! (Which is very good news for the upcoming CW spin-off.)

TVLINE | Which came first, the want to find a way to get John Constantine on Arrow, or the need to fix what’s wrong with Sara?
It was the second one. We love to have other DC 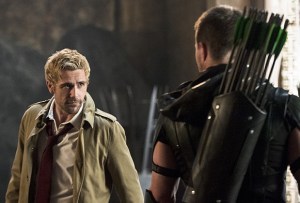 characters cross into our universe, as you know, but we always want to do it in a way that’s true to our characters. And when we were talking about bring Sara back — it’s been a pretty open secret that she had to come back, to go over to Legends of Tomorrow — we wanted to do it in the most interesting and dynamic way. We needed someone to bring her soul back, Constantine was our top choice of the characters in the DC universe that could do that, and we were lucky enough to get Matt Ryan, who was actually available.

TVLINE | Were you almost surprised by how organically it all fit together?
Yes, actually. We were. It was one of those things where we were really excited about the episode, because we knew it was going to be emotional and powerful to bring her back. To then have Constantine on top of that was just very exciting — in breaking that episode as well as writing it.

TVLINE | Will we get a chance to see quote-unquote “normal” Sara before she gets segued off to the other show?
As normal as Thea is now, that will be our version of “normal” Sara, which is to say she will still be dealing with the aftereffects of the Lazarus Pit and a her own version of bloodlust. But yes, we’ll get an opportunity to see her, and to see her reunited with her family — with Laurel, in particular.

TVLINE | Aside from the Constantine of it all, the other thing I really enjoyed about the episode was how you gave yourselves a moment to address the long-standing Oliver/Laurel issues. How important was that for you, to touch on these unspoken resentments?
That was a huge priority for us, coming into this season. Laurel and Oliver have arguably the longest history of any of the characters on the show, and with her becoming Black Canary and Oliver’s sort of constant push-and-pull about whether or not he approved or disapproved of that, and also his ongoing drive to protect everyone he cares about, it felt like this needed to get out there and come to a head. We are proud of those scenes because we wanted to put their relationship on different footing, and those scenes really accomplished that. They aired their grievances, he’s heard her point of view, and being “new Oliver” this season — a kinder, gentler version of himself now that he’s in love with Felicity and trying to be more Green Arrow than Arrow — we’re excited to see where that friendship goes.

TVLINE | What is possibly 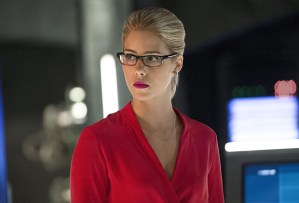 Felicity’s first move after hearing the full message from Ray?
My first move would be to try to go find him! [Laughs]

TVLINE | But she’ll at first probably look for a full-sized Ray.
Right. She’s trying to figure out where that message came from and how to help him. He’s her friend and that’s going to be her first impulse, to help.

TVLINE | I questioned the other week why you didn’t just have a teeny-tiny Ray hopping up and down on her keyboard, typing out a clear message,
[Laughs] I thought about that…. Yeah, it’s always a balance of you don’t want it to be comedic.

TVLINE | Damien Darhk by way of Lance dropped a big bombshell on Diggle. Will John feel closure or he not quite accepting what he has been told?
He’s been given some pretty powerful evidence [of what got Andy killed]. That said, it was coming from Damien Darhk, so…. Even though the sources seemed somewhat legitimate, he still has to consider that all of the information was channeled through somebody that was ultimately responsible for Andy’s death. So there’s some closure, but it’s also opening up a whole new wound in that his brother isn’t who he thought he was. It’s one of those situations where he’s going back and rethinking every last moment he had with his brother, and every moment in their childhood even. Dig’s undergoing a serious rethink of that relationship, with his entire family.

TVLINE | And my last burning question: Does the woman on Lian Yu have a name?
She does! Her name is Taiana. I don’t know if we’ve heard it [on-screen] yet. Maybe not. But you will hear it in future episodes.