“That was weird. And kind of amazing,” sighs Wicked City‘s Betty Beaumontaine (Erika Christensen), moments after a sexual encounter remarkable for its unspoken agreement that she pretend to be a corpse.

Like Betty before she fully succumbs to the twisted charms of Ed Westwick’s Kent, you too might experience intermittent misgivings about the one-hour pilot of ABC’s latest crime drama (premiering Tuesday, 10/9c) — albeit for very different reasons. While Kent’s twisted script threatens to push Christensen’s secretly sadistic nurse too far outside her sexual comfort zone, the initial tropes explored by creator Steven Baigelman’s screenplay at first feel all too familiar: The sociopath with mommy issues. The hardened detective (reeling from his partner’s suicide) paired against his will with an ambitious upstart. The plucky reporter who just so happens to find herself at the heart of the case. Stop me if you’re thinking, “I’ve already seen this movie/TV series/novel, thanks.”

But, just as in Betty’s boudoir scene, there is (wink-wink, nudge-nudge) payoff for those who stick around ’til the end of Wicked City‘s maiden voyage. 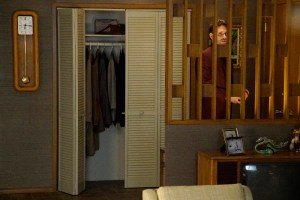 The action is undoubtedly propelled by Westwick’s creepily compelling performance — his “Kill me, I like giving back!” catchphrase (delivered to impressionable young gals) comes off as so meticulously rehearsed, it’ll chill you to the bone. But the show’s keen sense of time (1982) and space (L.A.’s Sunset Strip) prove equally hypnotic. There’s not a single detail among the woven lampshades, heavy wood-framed clocks and period-piece automobiles that comes off as inauthentic. The show’s costume, hair, set and lighting crews may not see their names on billboards; without their stellar work, though, there’d almost certainly be holes in Wicked City‘s tapestry.

But let’s not let this review devolve into a haiku about macrame. Instead, let’s boil the premise down to a single pithy-ish paragraph:

Charismatic Kent trolls the clubs of Sunset Boulevard looking for financially unstable women, then shifting his backstory (and his name) — he passes himself off as a real-estate mogul, a record-label exec, a studio insider — to better appeal to the women he’s targeting. When he’s sure he’s found a victim, Kent calls in a request to a local radio station, drives his lady friend to a deserted lookout point, and then produces a giant blade while his own, er, weapon remains flaccid despite plenty of oral encouragement. When Kent’s newest victim winds up decapitated and laid out in the same spot where the recently captured Hollywood Strangler’s initial kill was found, veteran Det. Jack Roth (Suburgatory‘s Jeremy Sisto) and whippersnapper partner Paco Contreras (Matador‘s Gabriel Luna) chase down leads — with some help from Roth’s undercover stripper-dealer/narcotics detective mistress. Kent’s circumstances change, though, when he meets Betty — a sweet-faced nurse with a penchant for sadism — and their scenes crackle with the warm glow of two misfits finally finding acceptance, mixed with the cold chill of “Uh-oh, these people really ought to be in a cage somewhere.” Did I mention Jack is married — and has a teenage daughter? Or that Contreras’ work in an internal-affairs case may have scored him a promotion (and caused Jack’s crooked old partner to take his own life)? Or that local reporter Karen McClaren (American Horror Story‘s Taissa Farmiga) winds up having run-ins with both Kent and Jack in the opening hour? 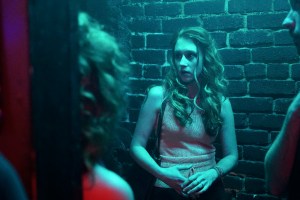 The sense of dread that builds over the hour is heightened by a terrific soundtrack — Joan Jett, Soft Cell, Romeo Void and especially Billy Idol — that practically feels like an extra (and vital) character. In fact, the pilot’s climactic sequence takes place at an Idol concert at the Whisky a Go-Go, where Kent works the room like an invisible predator and Roth’s conundrum reminds us of the terrible (and terrifying) constraints of being attached to a payphone (with its leash-like cord). Baigelman’s story is more interested in exploring the buildup before the gore, rather than dousing us in buckets of blood — which makes Wicked City simultaneously easier on the eyes and more terrifying for the soul.

Hopefully, subsequent episodes will allow Sisto and Farmiga’s characters to develop past the cliché states at which we meet them. Roth, in particular, seems to have been constructed on an assembly line at the Grizzled Detective Factory. Given his backstory, it makes sense that he’d have misgivings about his new partnership with Contreras, but at the rate they’re going, I’m worried we’re headed for a subplot with Roth hiring a skywriter to spell out “I hate you, man!” by Episode 2.

But Kent and Betty present a different kind of twisted love story. Christensen is great at conveying a put-upon single mother’s exhilaration as Kent’s “now for something completely different!” courtship. And Westwick is perfection creating a portrait of a character as a deadly blank space.

THE TVLINE BOTTOM LINE: As Idol’s “White Wedding” so aptly puts it,  “There is nothing safe in this world.” Wicked City takes that idea and spins it out in fresh and frenetic ways.