But Carter says that there were four names on his wish list that didn’t end up participating in the limited series, but it wasn’t for lack of trying on his part.

Among the MIA X-vets: onetime executive producers Frank Spotnitz and Vince Gilligan. (The former had his hands full with Amazon’s Man in the High Castle, while the latter was knee-deep in Season 2 of Breaking Bad spinoff  Better Call Saul.) “I asked Frank — unavailable,” Carter confirms, adding, “I asked Vince, too. But he was unable to come in.” 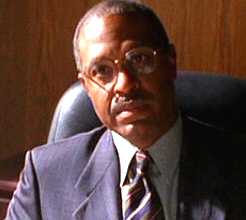 On the acting side, Carter made overtures to Robert Patrick (Agent Doggett) and James Pickens, Jr. (FBI bigwig Kersh), but their respective full-time gigs on Scorpion and Grey’s Anatomy (presumably) rendered them unavailable as well. (Possible silver lining: Doggett’s partner in crime, Reyes, will be on hand.)

Last May, Gilligan admitted he was “very sad to miss out” on penning a new X-Files episode, noting, “The X-Files was my second favorite job ever, a close second to Breaking Bad and Better Call Saul, and I’d love to be a part of it.