The video above, which Showtime released Thursday, makes viewers privy to the family’s greatest hits, remixed: Juvie. Pills. Sex. Violence. A positive pregnancy test. A highly inappropriate moment of self-love in a cemetery. And of course, Frank’s bare butt.

Per the network’s official description of the season ahead:

Season six of Shameless picks up a few months after last year’s finale, leaving the Gallaghers to prepare for yet another long Chicago winter. This season will see more than just the arctic Lake Michigan winds whipping through the Southside. Change is hard and the Gallaghers are as surprised as anyone at how life is turning out for them. But the question remains, as they come into their own and find out who they are, is it really possible that the Gallaghers could grow apart for good?

The dramedy returns Sunday, Jan. 10, at 9/8c. Scroll down to see the season’s key art (click on the image to see it in full), then press PLAY on the video at the top of the post for a taste of what Season 6 has to offer. 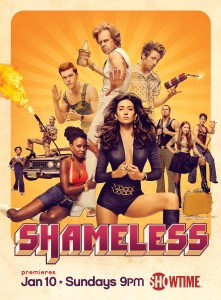