Question: Can you give us some Castle spoilers? —Anna
Ausiello: I’m hearing that a late fall episode — most likely the Nov. 9 installment — will be very Beckett-lite. As in she will, at best, maybe-possibly be in one scene. ABC declined to comment, but sources confirm that Stana Katic had an “out” in her contract so she could be here.

Question: Is there gonna be a holiday episode of Castle this season? —Barry
Ausiello: As you may have surmised upon reading about Castle (and Nashville) joining the ranks of split-season ABC shows, there will be no holly jolly follies this year. “Unfortunately,” co-showrunner Alexi Hawley told us, “because of the way ABC is platforming us — we do eight episodes and end [Nov. 23], and we’re not on again until the beginning of February — we won’t be on the air for the holidays.”

Question: Will we get a Bones Christmas episode this season? —Ericka
Ausiello: Is there an echo in here? Dunno about a Christmas episode. What I donno is, for the first time in the show’s 11-year history, we will be getting a Thanksgiving episode. “We, shockingly, have never done a Thanksgiving episode,” co-showrunner Michael Peterson marvels to TVLine.” That’s the one we’re prepping right now. There will be surprise guest stars. There’ll be returning family members.” 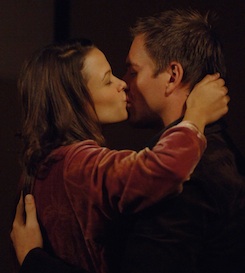 Question: I saw the BTS photos of NCIS’ Michael Weatherly and Scottie Thompson! Does this mean the Jeanne is back? —Alisha
Ausiello: Yes, as TVLine has since reported, Thompson will be reprising her role of Tony’s ex in November, for at least one episode. “The Jeanne Benoit storyline is rooted deep in NCIS history,” showrunner Gary Glasberg acknowledges. “Bringing Scottie Thompson back in Season 13 creates all kinds of opportunities for our characters. We are so excited to welcome her back into our family and promise the fans some genuine surprises.”

Question: Any word on Matt’s supposed new love interest on The Vampire Diaries? — Clare
Ausiello: First of all, Clare, I’m glad to hear you’re also invested in the romantic future of Mystic Falls’ lone human. That said, the show is currently casting the role of Penny, a “cute” but “formidable” young cop who isn’t afraid to get her hands dirty when it comes to the supernatural. (Sounds like a perfect match for Matty Blue, no?)

Question: I need to know who that woman was hunting Stefan and Damon in Vampire Diaries‘ season premiere. Any intel? — Sasha
Ausiello: You’re not alone, Sasha. We’re also dying to find out — so to speak — and this is probably a pretty big clue: The show is introducing a legendary vampire huntress named Hannah, who “literally cannot rest until her vengeance is complete.” Even if Hannah’s not the shadowy figure we saw in the premiere, I imagine her arrival is still going to be a major bummer for the Salvatores.

Question: Now that Fitz has Simmons back on Agents of S.H.I.E.L.D., will FitzSimmons shippers see their relationship throughout the current season? —Tony
Ausiello: Nary a soul not employed by Marvel would be able to preview the whole season, but ‘shippers such as yourself can take comfort in the fact that this Tuesday’s episode features a lot of hand-holding as well as a momentous occasion you perhaps thought had long been forgotten about. (That said, the very final scene uncorks quite a twist to it all.)

Question: Any scoop on How to Get Away With Murder? —Stew
Ausiello: A word of caution for those of you already passing judgment on Wes, Laurel, Michaela and Connor for abandoning the gravely injured Annalise on the 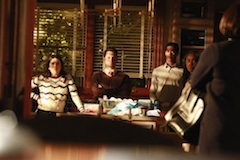 floor of the Hapstall mansion in those cryptic flash-forwards. “I find it hard to believe that any of them would be able to leave her bleeding there — whether they want her dead or not. They’re just kids,” says showrunner Pete Nowalk, with a chuckle. “Even if you think you want someone dead, if you shoot them, well, I know I’d have instant regret and want to fix it.”

Question: Hi Michael, I need anything you have on How to Get Away With Murder Season 2, plz n thx. —La-Shauna
Ausiello: K, ur n luck! B/C I hv intel. When we grilled Nowalk about when/whether we’ll learn the whereabouts of Rebecca’s body, here’s what he had to say: “No secret goes uncovered in the world — and especially in our world. If we don’t show you something, it’s for a reason.” Hmmm. Sounds like Wes and Eggs911 need to invest in some bloodhounds.

Question: Any scoop on the Looking wrap-up movie special? —Delanda
Ausiello: Filming gets underway on Nov. 2, which is why Jonathan Groff is stepping away from his role in the Broadway smash Hamilton for the entire month of November (Girls‘ Andrew Rannells will temporarily replace him in the musical). The working title of the two-hour sendoff is Looking For an Ending (I have to imagine that will change) and it finds the gang coming together to celebrate an important milestone. Several new faces will be joining Patrick, Dom & Co., including cute twentysomething tech savant Jimmy and thirtysomething “muscle bear” Jake.

Question: Hola! Any scoop on #Scorpion? —Javi
Ausiello: Hashtags have no place here, Javi. Ask Ausiello doesn’t work like that. Also, it’s annoying. But to your question, yes, I have a #Scorpion scoop. The sophomore nerdrama is bringing #WaltersDad into the present day (pops previously appeared via flashback, as played by #GlennKeogh), and he’s going to be joined by #WaltersMom (played by Pamela Shafer)! A family crisis of sorts brings the ‘rents to town later this #fall, and it doesn’t take mom long to figure out that #Paige is hot for her son. Mrs. O’Brien is also quick to remind her future daughter-in-law that #Walter is an #emotionalhotmess so, um, #thanksfornothingmom, #amiright?! (Toldja it was annoying). 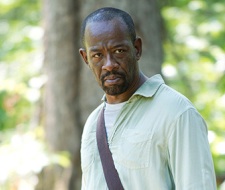 Question: Do you have any more information about the Morgan flashback episode coming up this season on The Walking Dead? —Barry
Ausiello: Showrunner Scott M. Gimple wrote the episode while at Comic-Con last July, which is why he didn’t have much free time to actually enjoy Comic-Con. “It was weird to be across the street from Comic-Con — my 21st Comic-Con — and not [have time] to go in.” The sacrifice appears to have paid off, as the EP says, “Working on that episode was one of the great pleasures of the season for me.”

Question: Now that Once Upon A Time is delving into Camelot and King Arthur, will we be meeting Morgan Le Fay? —Joe
Ausiello: Matt Mitovich made a point to ask your question at Once’s New York Comic-Con panel on Friday, and sadly the answer was a firm no. “There is only so much we can fit in,” said co-creator Adam Horowitz. “We’re telling our spin on the Camelot story, but it’s really about our core Once Upon a Time characters.”

Question: Does Once Upon a Time’s Emma remember the warning she received when she was much younger, about pulling Excalibur from the stone? —Laura
Ausiello: She doesn’t just yet, and you can perhaps chalk that up to a crazy encounter not lodging itself too deeply in the mind of a tween. That said, Merlin-the-usher’s words will come into play as Season 5A unfolds. “That warning is prophetic,” says co-creator Eddy Kitsis, “and it will come back to either haunt — or warn — somebody.”

Question: Any scoop on Arrow? —Sara
Ausiello: Malcolm’s Season 4 will revolve “around Thea and trying to be a good father while also being the very evil, badass Ra’s al Ghul,” executive producer Wendy Mericle previews, adding that “we want to restore him to more of the Season 1 Malcolm who was going around and messing up Oliver’s plans and anyone else he can cross paths with.” Speaking of obstacles, Nyssa is “definitely not going to be on board with Malcolm as Ra’s,” Mericle says. “We’re hoping to take that in a cool, very fighty-fight orientated direction.”

This AAnd That…
♦ Laura Spencer’s promotion to series regular on The Big Bang Theory won’t prevent her from popping into Bones occasionally. In fact, look for her squintern, Jessica, to turn up in Episode 6 (airing in November). Teases EP Michael Peterson: “We’re going to see what happens with Jessica and Aubrey. We saw a little bit of a spark last year.”
♦ I caught the first episode of Fox’s X-Files revival at New York Comic-Con over the weekend and I’m relieved to report that it was really good. There were a couple of really cool callbacks, Scully and Mulder’s first scene together is the perfect balance of funny and tense, the new conspiracy is appropriately inscrutable, and the guest stars (most notably Joel McHale and Annet Mahendru) are aces.
♦ Despite his very abrupt exit during last Tuesday’s season premiere, Barry’s dad Henry (John Wesley Shipp) remains “part of the fabric” of The Flash, writer/executive producer Todd Helbing assures. “He still provides an emotional support that Barry needs, and he will make an appearance down the line.”