The cast of ABC Family/Freeform’s Shadowhunters took the stage at New York Comic-Con on Saturday, revealing surprises about the supernatural series, premiering Jan. 12 at 9/8c.

For starters, you might want to keep your eyes peeled for a few outsiders crashing the party:

“What we tried to do is honor everything Cassie [Clare] created, but still try to throw in some surprises for the Mortal Instruments fans,” showrunner Ed Decter said, adding that we might see “characters from other Cassie Clare-created material.”

And even though the cast physically represents their characters to a T, the series will take each of them to new emotional levels — especially Dominic Sherwood’s Jace.

“[Jace’s] arrogance and his contempt for his own mortality” are the main things that will be explored with him, Sherwood acknowledged. “We go into Jace’s history and past and we find out he can be pretty vulnerable at times.” 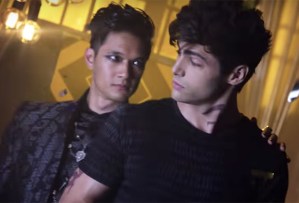 Fans of “Malec” — the relationship between Harry Shum Jr’s Magnus and Matthew Daddario’s Alec — also got a little treat during the panel.

“He’s very conflicted,” Daddario teased of his character, adding that the progression of the fan-favorite couple will be a “surprise” of sorts. “If you’re a fan of ‘Malec,’ you might be happy,” he said.

“He can go either way,” Shum Jr. added of Magnus. (To be fair, he was discussing whether or not his character is “evil,” but all is fair at Comic-Con.)

Another ‘ship fans might want to watch out for is “Sizzie” — Alberto Rosende’s Simon and Emeraude Toubia’s Isabelle/Izzie — as Toubia says there might be a “spark” there.

Shadowhunters fans, are you looking forward to ABC Family/Freeform’s series? Drop a comment with your thoughts/hopes below.