Is there anything that Eric Taylor can’t do?

When The Leftovers’ co-creator, Damon Lindelof, was faced with the daunting task of coming up with a second season of the HBO drama — and the first that doesn’t rely on Tom Perrotta’s novel — he drew inspiration from the Friday Night Lights coach’s “Clear eyes, full hearts, can’t lose” motto and went all in.

“Despite the fact that there is a genre premise that is underlying the world of The Leftovers, we really looked at it structurally more like Friday Night Lights, where it’s sort of the continuing condition of these people living their lives,” he tells TVLine. “It’s not like Friday Night Lights’ first-season finale had this big cliffhanger that needed to be resolved. You’re just like, ‘I like these people, and I want to spend more time with them.’” 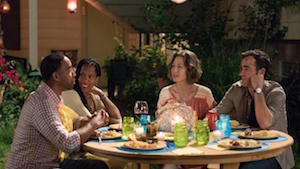 In the case of The Leftovers, the people with whom viewers most wanted to spend more time were unlikely lovers Kevin and Nora. “We knew that their [relationship] wasn’t going to be fully resolved at the end of the first season,” Lindelof says. “It was something that was just beginning… and that maybe [the audience] would want to see more.”

So the couple’s dynamic will be one of the few familiar touchstones that remain in Sunday’s premiere (9/8c), which finds Kevin and Nora living in a completely new setting (goodbye, Mapleton, NY; hello Miracle, TX) and surrounded by (mostly) new faces. Between those seismic shifts, the introduction of a fresh mystery and an overhauled opening title sequence (scroll down to bottom of story to view), the show runs the risk of its fans suggesting that there’s nothing “left” of The Leftovers. But the revamp was necessary, since Season 1 exhausted all of Perrotta’s source material.

“What made it such a satisfying conclusion to Tom’s book — because the novel ends exactly the same way as the first season does, with Nora holding the baby on the doorstep — is also what made it immensely challenging not to say, ‘Shouldn’t we just end it here? Why do we have to make them suffer more?’” shares Lindelof. “And I’ll be honest with you: At the end of the first season, I was a little bit of the mind that maybe that should be it.

“I’m not being a Negative Nellie here,” he adds, “but the audience was not exactly screaming out for a second season of The Leftovers. It’s not like we ended the first season with [Lost’s] Jack and Locke looking down into the hatch and it’s like, ‘You have to now continue the story.’ [We had to ask ourselves,] ‘How do we justify continuing? Is there an idea worth pursuing?’” 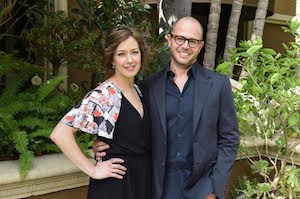 To answer those questions, Lindelof huddled with Perrotta, then expanded their brainstorming session to include a handful of new writers. Once they had a direction that they felt strongly about going in, HBO signed off without hesitation. “It’s a slightly less conventional way of doing a television show but one that I think is emotionally much better for me as a storyteller,” Lindelof theorizes, “because it forces me every single season to close the book. If you’re doing the other version of the show, you’re constantly setting up new threads that may or may not pay off. You’re introducing new characters that may or may not work. You feel like you constantly have to expand your universe just to generate story.

“And I’ve been in that situation before,” he continues. “I’ve watched other shows completely and totally collapse under their own weight when they try to do that. Twin Peaks, which is my favorite show of all time, went from the cover of Time magazine to cancelled in 32 episodes.”

Viewers will have to wait until Sunday to decide for themselves whether the changes have given the show a new lease on life or sounded the death knell. But after pre-screening the first two episodes, I can personally attest that The Leftovers remains one of the boldest and most engrossing series on the air. Not only does Season 2 maintain the dark tone and emotional resonance of its predecessor, but its new mystery infuses the narrative with a galvanizing sense of urgency.

But enough about me. What’s leading man Justin Theroux’s review? “Damon wanted to find a vehicle through which he could talk about bigger ideas than the ones we addressed in Season 1, and I think he did that very effectively,” says the actor. “We’re shooting the finale now, and I’ve read everything — and performed 90 percent of it. There were just so many breathtaking scenes. [The show] just got smarter.”