The Season 4 premiere of The CW’s Arrow (airing Wednesday at 8/7c) finds partners in crimefighting (and more) Oliver and Felicity very much in love and living in the ‘burbs — but can that last when they’re needed back in Star City?

Having screened the season opener, TVLine is here to share some teasers about the lovebirds’ future, a bromance gone bad, this season’s mysterious flashbacks and more.

♦ As much as we know about this season — and let’s be honest, we know a lot thanks to months of press, promos, Cons, etc. — there are still a couple of major surprises in the hour. 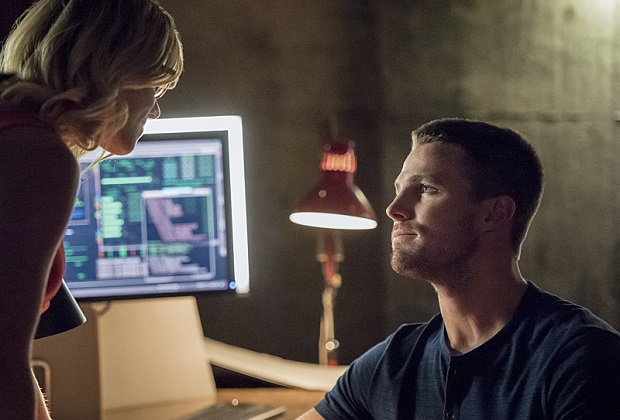 ♦ While Felicity is “deliriously happy” with Oliver, their suburban life of brunching with new friends — who bring up kids! — secretly bores her to tears. As the pair come back to Team Arrow, some revelations will come out. FYI: the ring in the souffle belonged to Oliver’s mother. (Bad omen, perhaps?)

♦ Thea’s lack of restraint in the field gives Oliver pause for concern — but has anyone else on the team noticed the younger Queen’s eagerness to pummel?

♦ Brrr! No, Captain Cold doesn’t make an appearance in the opener, but Oliver and Dig’s relationship is majorly frosty, with Dig lobbing a particularly harsh statement Oliver’s way about the darkness inside him.

♦ Oliver and Felicity may have more privacy at the Queen loft than they anticipated. Turns out Speedy has been staying elsewhere, given that Ra’s stabbed her in the living room and left her to die and all.

♦ This season’s Big Bad, Damien Darhk, makes his powerful presence and grand plans known quickly to Star City’s top leaders. It’s no wonder that no one, including Walter Steele, wants to be Mayor. (Side note:  Darhk kind of reminds me of Buffy‘s Mayor — but more sinister.)

♦ If you’ve noticed there hasn’t been a lot revealed about this year’s flashbacks, that’s for good reason. What we can tell you: expect an Easter egg and a big twist.

♦ Laurel is kicking butt, saving her dad from an attack. And it’s her and Thea, sans Dig, who decide to ask for Oliver’s help in saving their city from Damien Darhk’s “ghosts.”

♦ Guess who said it and to whom: “If Oliver Queen always made the right choice, he wouldn’t need you.”

Arrow fans, what are you most looking forward to in Season 4?