Marvel’s Agents of S.H.I.E.L.D. on Tuesday kicked off its Secret Warriors storyline, in which Daisy attempts to rally the newly Inhuman. But one thing is no longer a secret to viewers: whether Jemma Simmons is alive or dead!

Here, we recap the biggest changes and revelations from the Season 3 premiere, reveal star Chloe Bennet‘s feelings about Ward and offer a bit of scoop from the actress and castmate Clark Gregg.

THE INHUMAN CHANGE | Skye, err, Daisy and Mack are tasked with finding and reaching out to the newbie superpowered aliens. While Daisy tries to help them transition, her former guide through the confusing period is playing Grey’s Anatomy. Lincoln — who now sees his gift as “a curse” — is determined to lead a normal life, which means going back to his job as a doctor. However, very big, scary Lash’s (played by NFL veteran Matthew Willig) entrance brings that “normal” existence to a crashing halt. The new foe blasts Inhumans with energy, leaving behind a corpse, and has the ability to make hospital walls just vanish. Even Daisy and Lincoln’s combined powers aren’t enough to take him down. Daisy tries again to convince Lincoln to join S.H.I.E.L.D., but he runs off instead. 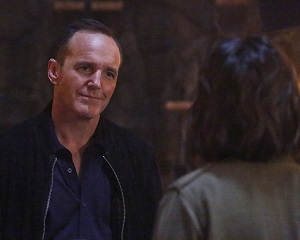 A NEW RIVAL | Coulson is having a hard time adjusting to Daisy’s name and his robotic hand, which star Clark Gregg believes Fitz created for him. “I think the hand’s probably better than I’m making it look,” Gregg said at a premiere screening panel. “He can’t even seem to tie a tie, which is why he seems to be wearing a little more casual [clothes].” On top of all that, a black ops group is also after the Inhumans, and their leader Rosalind Price (played by UnREAL‘s Constance Zimmer) throws Coulson off his game a bit. Not only does she trap him and Hunter, but she also knows about T.A.H.I.T.I. She’s actually part of a task force created by the president to neutralize alien threats. So could she and Coulson become allies? After all, they seem to have a common enemy in Lash.

WHERE IN THE UNIVERSE IS FITZSIMMONS? | Leo Fitz, who are you and what have you done with the old Leo Fitz?! Apparently, there’s nothing like love for a woman to make a man step up. Driven to find Simmons at any cost, Fitz travels to Morocco to take on a bunch of dangerous arms dealers and get an artifact that may help with the mysterious Kree monolith. “Only love can make a man so stupid,” the head arms dealer comments. Just when it looks like Fitz is about to lose his life, he tricks them all and gets away with the artifact. But was it even worth it? The coveted item turns out to be a piece of paper with the Hebrew word for “death” written on it. “Do something!” Fitz yells at the monolith as the final scene reveals Jemma running for her life in what appears to be an alien, desert environment.

BOBBI AND LANCE | Relationship status: It’s complicated. They’ve been doing it, and now she wants her ring back and all that separates them from what they were is a piece of paper, which Bobbi jokes (?) is in the ocean. But Lance is going to the ground on a mission. Like I said, it’s complicated. 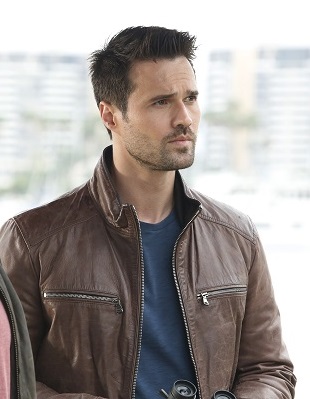 MISSING IN ACTION | While May is simply on vacation, no doubt enjoying Blair Underwood, Ward is… well, your guess is as good as ours. One thing is for certain: Daisy’s feelings about her ex-handler haven’t changed. “Well, [he’s] a murderer,” star Chloe Bennet maintained at the panel. “Chloe loves Brett [Dalton]. Daisy thinks [Ward] is a little psychotic, probably, right?” Dalton’s response? “I would say, ‘Devoted.'” As for his possibly evil empire, Dalton warned, “It’s a different HYDRA. Watch out!”

Below, Bennet and Gregg mull whether Daisy’s new role will cause her and Coulson to butt heads. They also preview a possible romance for Coulson, the Secret Warriors arc and more.

TVLINE | In the premiere, we really see Daisy stepping up as a leader. How does she see herself and her role within S.H.I.E.L.D.?
CHLOE BENNET | I think she mostly feels obligated. She went through the transformation. She understands more than anyone what it’s like to be so confused and scared and terrified and having to really completely change your life. At the same time, she feels responsible because Coulson has tasked her with being the person who goes out there and assesses the situation and finds these new Inhumans, whether or not they’re bad or good. It’s exactly what she’s supposed to be doing, and she’s confident in knowing that she’s doing exactly what she’s supposed to be doing. But at the same time, she’s kind of torn between two sides. She’s a S.H.I.E.L.D. agent and she’s an Inhuman. She has responsibilities to both sides.
CLARK GREGG | That sounds dramatic.
BENNET | It’s pretty dramatic. It makes for good TV. I think that will be the biggest struggle for her this season.

TVLINE | Is that an adjustment for Coulson, seeing Daisy in this leadership role? Is there maybe some tension between them?
GREGG | No, he gave it to her. He promoted her. She’s not the director of S.H.I.E.L.D., but he’s always felt that she is special and that she has leadership capabilities. As Chloe just said so eloquently, she has a unique perspective on what it’s like to be Inhuman. The concept of Secret Warriors is to put together a team of people who have powers. She seems uniquely suited to that, and he welcomes her growth and her new power. There certainly will be times when she voices her opinion in ways that are uncomfortable or hard to get used to or maybe even takes some liberties because of their closeness. But you know what, if you love people, you’ve got to give them a chance to reach their fullest potential, and that’s what’s strong about Coulson.

TVLINE | What does the Secret Warriors storyline bring to the show that you find different or exciting?
GREGG | I love the idea of mutants in whatever form it takes. It means that people evolve differently than the rest of us in the broader metaphor of the comic book universe, and they have powers. They have different abilities. What’s cool about the Inhumans is some of them take a while to come online. They’re very internal or have to do with prescience or super strength. You never know what each person’s going to have. Whenever people evolve differently in our own world than what has been considered the norm, there are people who want to wipe those people out and there’s people who want to welcome and accept that that’s the new version of us. I find that a really potent metaphor, and it’s what I like about a comic book show, when it can play with those ideas that you don’t see in a naturalistic drama.

TVLINE | What were your first impressions of Lash?
GREGG | “Damn, that dude is big!”
BENNET | Yeah. We had our first rehearsal with him for the first episode. I was looking down at my lines and then I looked up and it was like, “Oh, my God!” Like I freaked out. I think I peed my pants or something. He came in, he’s so big and such a good dancer. It was so much fun. We had a dance-off to Taylor Swift. [Editor’s note: Check out the video proof at the end of this post.]
GREGG | There’s a lot of dancing on the show. Seven-feet-tall, giant monster-y dreads! He was a welcome addition. We love this guy.

TVLINE | What’s the dynamic like between Coulson and Constance Zimmer’s character going forward?
GREGG | With this global outbreak of Inhumanism, suddenly there’s people waking up and accidentally dissolving a block of houses, so Coulson and Daisy are not the only ones trying to find them. There’s suddenly another group aligned with the government called the Alien Threat Containment Unit, run by a formidable woman named Rosalind Price, played by the even more formidable Constance Zimmer, who we’re crazy about. They’re going at it, nose to nose. They don’t see eye to eye right of the gate. They’re don’t trust each other very much. They have serious trust issues.
BENNET | But I think it’s going to end up being a little sexy relationship.
GREGG | You think?
BENNET | Yeah.
GREGG | Your mouth to Odin’s ears, my friend.
BENNET | I’m really excited for Coulson to finally get laid. I mean, hopefully.
GREGG | We haven’t seen that. We don’t know. Sexual spoiler alert!

S.H.I.E.L.D. fans, grade the season opener via the poll below, then hit the comments to back up your pick. 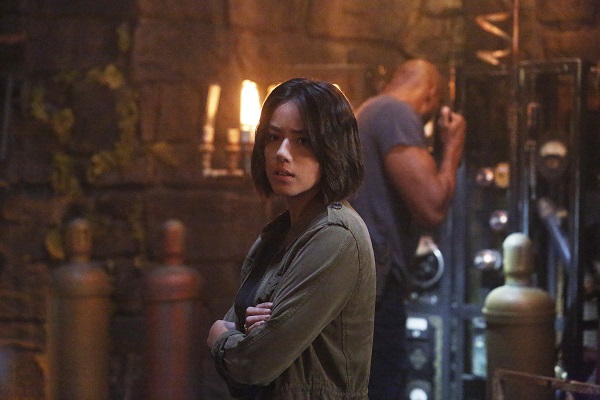