Oh, and Anika? That was an Emmys opening video.

Forgive us for channeling Empire‘s Cookie, but Sunday’s 2015 Emmy Awards kicked off with an elaborate, on-point pre-taped bit that set the bar high for the rest of the telecast.

The set-up: The evening’s host — and Brooklyn Nine-Nine star Andy Samberg — locked himself away in a bunker to watch “every show” so he can participate in TV conversations with his friends.

Along the way, he ran into all your small-screen favorites, including Castle‘s Nathan Fillion, The Odd Couple‘s Yvette Nicole Brown, Fresh Off the Boat‘s Randall Park, Mad Men‘s John Hamm, Scandal‘s Kerry Washington, Last Man on Earth‘s Will Forte (in a Les Miserables homage), Better Call Saul‘s Bob Odenkirk and many more.

The whole shebang wrapped with a giant dance number, which led into Samberg’s monologue, which he started by warning everyone that Justin Timberlake wouldn’t be joining him and during which he was joined by Glee‘s Jane Lynch dressed as the “Shame!”-ful “mean nun from Game of Thrones.”

Grade the video and monologue via the poll below, then hit the comments to back up your pick! 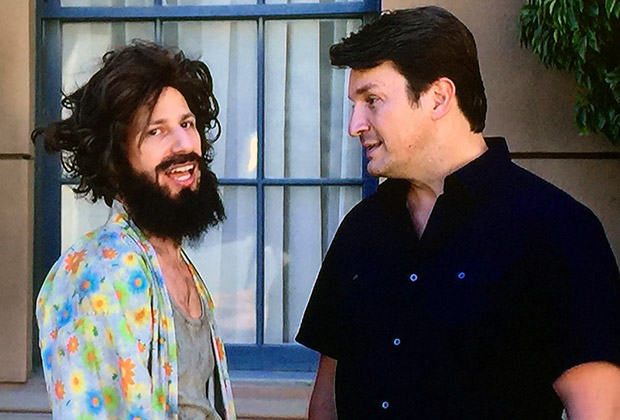