In the end, it all comes down to that thing you hated doing in gym class in the sixth grade. For 75 feet, straight up into the sky.

On the Season 7 finale of NBC’s American Ninja Warrior this Monday, not one but two competitors — 33-year-old bus boy/professional rock climber Isaac Caldiero (above), and 36-year-old cameraman/dad Geoff Britten (below) — conquered Stage 3, 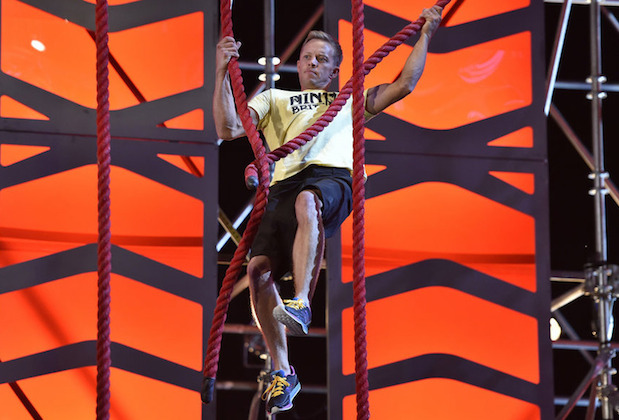 which involved a stretch of four obstacles where your feet never touch the ground.

So where the competition series never before had crowned an American Ninja Warrior, now it has two touting the title.

But only one could walk away with the $1 million prize.

The gents thus faced off at Stage 4 aka Mt. Midoriyama, a 75-foot rope climb. Britten went first and traversed the vertical path in juuuuuust under the 30 allowed seconds.

Caldiero followed, and shot up the 75-foot rope with almost four seconds to spare, earning him the boffo payday.

Did you tune in and lay witness to the historic ANW event? More thrilling, would you say, than watching famous-ish people learning to ballroom dance on the other channel?